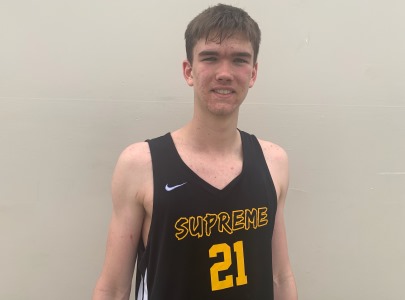 After a storied middle-school career and entering the high school ranks last season and making a tremendous splash, Perry High School's gifted and promising 6-foot-11, 200-pound sophomore post Dylan Anderson is prepared and set to have a big sophomore campaign for himself and his high school program. One of the most highly-acclaimed young prospects in Arizona basketball history, Anderson is ready to change the game.

Last season, it was very exciting as Anderson entered the high school ranks, as he entered the AIA already possessesing division-I scholarship offers from division-I programs. During his freshman season, Anderson helped lead the Pumas to a 19-10 overall record on the season. While the team was a pre-season favorite to win last year's 6A State Title, and failed to do so, the Pumas will return this high school season as a favorite again to compete for it all, amongst other state title hopefuls, Millennium, Salpointe, Cesar Chavez and others.

Anderson was strong in his freshman season, as he looked to make a name for himself in the Arizona high school ranks, but as a sophomore we will see a much different player as Anderson has matured a great deal over the the spring and summer, while traveling on the club circuit. During that time, Anderson competed on the Nike circuit and even saw a lot of action on the Nike EYBL circuit, where he faced some of the nation's top young prospects - preparing him for the future and a big sophomore season.

Anderson enters his sophomore season as one of the most sought after recruiting targets in America's 2022 Class. Possessing offers now from Arizona, Arizona State, California, Grand Canyon and Northern Arizona, Anderson's college recruitment is just beginning to take shape. Many, more college programs have yet to focus their sights on Anderson, so look for a large number of scholarship offers to begin to pour in for Anderson, who has much promise and upside as any prospect I have ever seen in the state of Arizona.

Anderson is currently rated among the Top 10 prospects nationally among America's top overall prospects in the 2022 Class, and is regarded as the #1 overall center in the class.  Anderson is a sure-fire future pro prospect already, and competes very hard on both ends of the floor and competes at a high level for a prospect his age.  He has a very nice skill level for a prospect of any age, as he is able to shoot the basketball extremely well and with excellent range on his shot, a very rare quality found in prospects with Anderson's extreme size, length and youth. Anderson has extreme mobility and fluidity for a prospect his size, and he runs the floor very well and is a strong finisher around the rim.

Anderson is an attractive a prospect as I have ever seen at his young age, and he shares a resemblance to former Duke star forward Christian Laettner as a player.  Anderson's potential as a player is limitless, and he will do a lot in bringing more respect to the state of Arizona's basketball, similar to that of star Pinnacle HS guard Nico Mannion, over the next (3) years of high school. With everyone in America's basketball community wanting to soon catch a glimpse of Anderson, and the future desire to have him included in every major national exposure event, will have Anderson and his camp very busy over the next few years. The development and growth of Anderson as a player, and his exploits on the basketball court will bring a lot of attention to the Arizona basketball community over time, and will also, in it's own way, help the continued growth and development of the Arizona basketball culture - helping more Arizona kids also get recruitment opportunities.

"We want to use the attention that Dylan receives to help Arizona kids," said Rob Anderson, Dylan's father. As a result of Dylan's popularity among the nation's basketball media and scouts, the shoe companies also looked hard to get involved with Anderson at a young age. As a result of Anderson's high-acclaim and extreme promise as a future pro-prospect, Nike made a commitment to Anderson and his family early in the process and extended a Nike sponsorship to the prospect - creating a Nike-sponsored program in the state of Arizona, the Arizona Supreme.

Rob Anderson orchestrated the tremendous Nike contract for the state, and created the club program last year in an attempt to help more Arizona prospects than just his son. Anderson advised me that his pursuit was not to create more confusion in Arizona club basketball, but rather create a new option for Arizona's best basketball talent to play for, and utilize the Nike brand and it's very popular EYBL circuit to help more Arizona youth gain national exposure. The Nike EYBL circuit has never been an option for elite Arizona prospects, unless they played for heavily-sponsored out-of-state Nike teams. As a result of the attention gained by Dylan Anderson, the creation and continued development of the Arizona Supreme program will now do that.

Over the next couple years, the road for Dylan Anderson and his Arizona Supreme program will be epic, as he faces such top-rated national 2022 opposition as Lebron "Bronny" James Jr. in gyms which should bring record crowds over time. It will definitely be a sight to behold on the Nike EYBL circuit, and possibly at the Nike Peach Jam in Georgia.

But before that happens in the spring and summer over the next couple years, Anderson will return to Perry this season and look to lead his Pumas to a 6A title. As star junior post DaRon Holmes did so last season as a sophomore at Millennium HS, Anderson will look to do the same thing for his high school program this season as a sophomore. Regardless of what happens for Anderson and his Perry teammates though this season, it will be a fun ride to watch and observe for Anderson over the next few years, as his future and potential potential for the future are limitless.