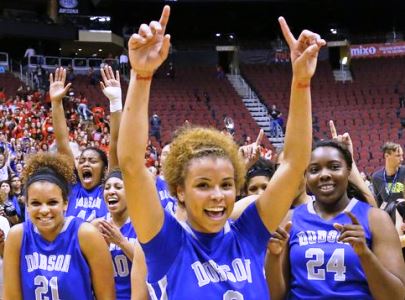 5-foot-6 senior point guard Dyesha Stahley was not about to sit out the state championship game - an opportunity for her Dobson team to prove that they were destined to win it all this season.  Dobson (30-2) had a terrific season, but many basketball enthusiasts in the state were beginning to believe that other teams would get it done instead.

Stahley was not about to pass up this chance to go out as a champion in her senior season.  Stahley had injured her knee in Dobson's semi-final victory over Liberty High School, and had returned to the court in the third period to lead her team to victory.

It was thought that Stahley had a tear of the medial collateral ligament in her left knee.  Dobson would need Stahley, even with the injury, to defeat a focused and determined Millennium High School basketball program.  Millennium featured the best point guard prospect in the state - 5-foot-6 junior guard Raina Perez.  A match-up of Stahley and Perez was one to witness.

The last time Dobson High School reached the state finals was 5 years ago.  Dobson had won a state title before, while the Millennium basketball program had never been to a state championship game.

Dobson (30-2) would manage to overcome a hot-shooting Millennium team with a four quarter charge to win the game, 58-49, and take home the Division-I girls state championship.

Millennium came out hot on Monday evening, as they converted 7 of 12 three-pointers in the first half to take an 8-point advantage after two quarters of action.  Millennium would also take a 4-point advantage over Dobson into the fourth period.

In the fourth, Dyesha Stahley would go off for Dobson - scoring 13 points down the stretch for Dobson to lead her team to victory.

Dobson senior guard Alexis Todd also led the way  for Dobson, as she finished with a game-high 20 points in the win.