Dwayne Walker Goes Off In Loss To Findlay Prep 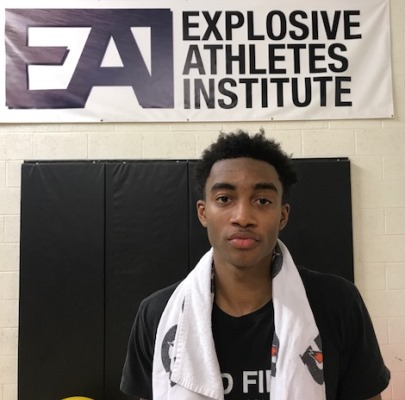 AZ Compass Prep traveled to the state of Nevada this week to take on high school power Findlay Prep (NV) in their second game of the high school season.  AZ Compass would make it a good contest, until falling to Findlay Prep, 102-84.  In the loss, 6-foot-3 senior guard Dwayne Walker would come up big - scoring 37 points in his team's loss.

Walker is a native of Milwaukee, WI, and moved to the state this high school season to improve his exposure to college coaches and develop as a player, while playing for AZ Compass Prep.  Walker attended Juneau High School (WI) last high school season, where he ranked among the elite prospects in the area.  As a junior last season, Walker averaged terrific numbers - 27 points and 11 rebounds per/game.

Walker's performance against Findlay Prep proved that he has picked up where he left off in Wisconsin as a junior, and also proved that he is worthy of serious college recruitment this senior season.

Currently, Walker possesses one offer for himself from Grambling State.  He has received serious interest thus far from such college programs as UNLV, Cal State Northridge and Portland State thus far.

Many schools have inquired about Walker this fall, so his college recruitment should really pick up for him during his senior season, heading into the late spring signing period.

Walker will lead AZ Compass in their next contest @ home on Tuesday against CGM Prep Academy, and will look to continue his strong play.

I will continue to follow Walker this high school season, and bring you any recruiting updates as they develop for him throughout the year.

Arizona Hoop Review Scouting Report:  Walker is a left-handed shooting guard prospect with combo-guard capabilities.  He has a nice, pure shooting stroke with a quick release that allows him to get his shot off quite well, while also being able to put the ball on the deck and make plays at a high level for himself towards the basket.  He is a strong finisher at the rim and has very good athleticism for himself - a very good attribute for a combo-guard prospect.  Walker is a good ball handler and passer, but he is at his best scoring the basketball, which he does at a high rate.  He is a strong rebounder for his size, which suits him nicely.  He is also a capable lock-down defender and has excellent lateral quickness, while also being able to play passing lanes quite well.  He is strong in the open floor where he thrives, and is a good slasher as well in the half court set.  To maximize his college recruitment, Walker will need to prove that he can play the point guard position consistently, and make players around him better in game situations.