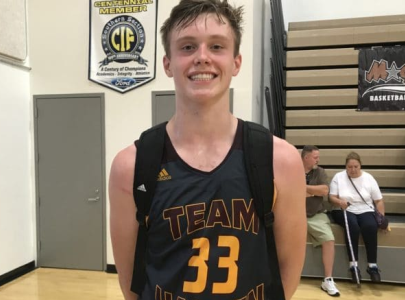 One of the top prospects in Arizona's 2021 Class is on the rise and picking up steam fast in his recruitment, as he has developed into one of the premier post prospects in the class. Perry High School's 6-foot-9, 220-pound junior post Duke Brennan had an excellent spring and is coninuing his strong play this summer. Recently, Brennan received his first scholarship offer from a Big Sky program.

Northern Arizona University Head Coach Shane Burcar and his basketball staff have made their commitment to Brennan, and have extended an offer to him - his first division-I offer.

Brennan is one of the better sleeper prospects in the state currently, and is one prospect that college programs need to take a hard look at. He has excellent size for the post position and is working hard to develop as a player. He has grown a great deal physically over the past year and is now coming into his own as a post prospect. Brennan has broad shoulders and enjoys mixing it up inside the paint against opposing post players. He also runs the floor hard and is a good finisher around the basket. Brennan has really improved over the past year and continues to develop - a post prospect that is definitely on the rise in the class and in the West.

Brennan has traveled this spring and summer with Team Harden on the Adidas Gauntlet circuit, and has held his own against top-rated post opposition. What has been impressive for Brennan, is that he has been the lone post prospect on his 16U Harden team, and has held it down in the low post - displaying excellent toughness for the post position. Brennan competed for both Team Harden's 16U and 17U teams this spring.

Last high school season for Perry, Brennan saw a good amount of playing time on a talented Perry lineup, but, as a result of his development this off-season, I look for Brennan to have a much bigger impact for Perry this up-and-coming high school season, as he teams up with gifted young 6-foot-11 sophomore prospect Dylan Anderson to create a huge low-post lineup for Head Coach Sam Duane Jr. - one of the best and biggest post lineups in the West.

Arizona Hoop Review Scouting Report: Brennan is a rapidly developing low post prospect with broad shoulders and excellent overall size for the low post position. He has grown a great deal over the past year, and is a true post player that enjoys mixing it up inside and does not shy away from physical contact. Brennan is a good low post scorer with a good jump hook and solid low-post footwork. A solid shooter out to 15 - 18 feet. Has solid low-post footwork. Runs the floor hard and is a good finisher in transition for his size. An active rebounder. Capable shotblocker. Not overly athletic but has good size and length. Good low post defender. He is still developing a great deal, but has shown excellent promise that he should realize over time. A good sleeper prospect.