Duke Brennan On The Rise 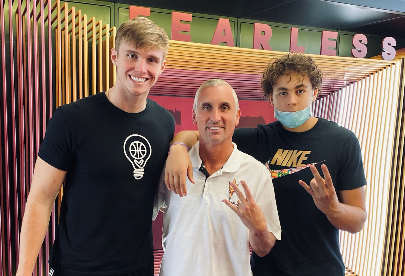 One prospect on the rise in Arizona's 2022 Class of prospects is Hillcrest Prep's tough and imposing 6-foot-10, 260-pound senior forward Duke Brennan. After changing schools several times and a roller-coaster ride in his college recruitment, Brennan has found a nice home at legendary Hillcrest Prep, and is now seeing his play and college recruitment take off to another level. Brennnan is fresh off a strong performance at the Pangos All-American Camp in Las Vegas, Nevada, and has received numerous scholarship offers, as a result.

Brennan (pictured left) has seen a lot of changes in his short athletic career. After starting his high school career at Perry High School and spending his first two seasons at the program and teaming up with University of Arizona star commit, 7-foot senior Dylan Anderson, it looked as though the dominant Perry lineup would be intact for several years. But after a change of plans for Brennan, he chose to leave Perry after his sophomore season, and picked up with Eduprize Prep to start his junior season. Brennan then made the move to AZ Compass Prep, where he helped boost the talented front court of the AZ Compass Prep team, that would go on to finish #3 overall nationally at the GEICO Nationals. Brennan though would leave the program mid-way through the season, and would finish his junior season playing for Hillcrest Prep, where he would again team up with an absolutely loaded group that included future NBA Draft pick Mike Foster (McDonald's All-American).

Since joining Hillcrest, Brennan has seen his college recruitment take off again. After a nice spring (2020) last year where he received numerous offers, Brennan would pick back up where he left off in his recruitment - now soaring in his recruitment and being recruited by many high-major division-I programs.

Brennan now has a really long list of offers for himself that includes Arizona State, Wake Forest, Georgia, Seton Hall, Cal, Nevada, UC-Irvine, UC-Santa Barbara, GCU, Northern Illinois, Mississippi State, Hawaii, Cal-State Fullerton, UMASS, Rice, Northern Arizona, Eastern Washington and Montana. It will be very interesting to see what direction Brennan actually goes in his recruitment, or if their is a current leader in his college recruitment, as he has not indicated one.

Recently, Brennan was selected to take part in the Pangos All-American Camp in Las Vegas, Nevada. Brennan performed very well in the event against loads of high-major competition. For his performance, he was selected as a Top 60 overall performer in the event - a very nice honor.

Brennan is now coming to the biggest summer of his career, and with loads of college programs on him. I am looking forward to watching him compete against other top-rated post prospects in the West, as Brennana is enjoyable to watch play, since he is very aggressive, tough and willing to throw his body around - making for exciting play on the basketball court. I will also be excited to watch just how many schools will look to get involved with him this summer, as Division-I college coaches get back on the road and catch a glimpse of him in person. He is an attractive looking prospect with excellent size, which is attractive to college coaches. Brennan is a commodity for college programs.