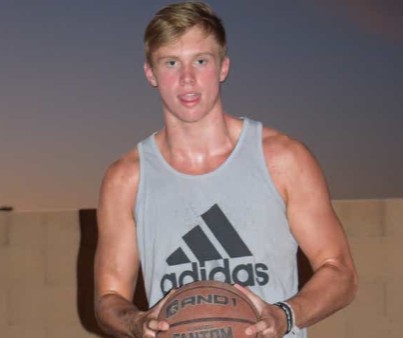 Eduprize High School's talented and physical 6-foot-10, 250-pound senior post Duke Brennan is definitely a prospect on the rise in Arizona's 2021 Class. After receiving several offers this spring, but missing out on a big spring and summer that would have impacted his college recruitment a great deal, Brennan continues to soar - proving he is worthy of much more college recruitment. While already possessing offers for himself, Brennan's strong performance in last weekend's End of Summer Showcase legitimized his campaign for much more recruiting interest.

Brennan received several offers this spring, suggesting that he would have a big summer recruitment, but the surging COVID pandemic would limit his rise in recruiting, as the NCAA Spring and Summer Evaluation Periods would get cancelled. Since there are very few true bigs available in the West currently, Brennan, a true low post prospect, would have absolutely blown up. Especially when you consider the level of physicality that he plays with. Brennan is an attractive prospect that is worthy of significantly more and higher college recruitment.

Brennan showed his improved body and physical strength last weekend in the End of Summer Showcase event, organized by West Coast top-rated basketball scout Gerry Freitas. With many top-rated club programs in action, Brennan was one of the top overall prospects in the event. While playing on a loaded team of 2022 prospects, The Show, Brennan held down the low-post on a guard-laden team that was very skilled and talented. Brennan's toughness and physical play, combined with a nice overall skill level caught the attention of every scout in attendance.

Currently Brennan has offers from UMASS, Grand Canyon, Rice, Northern Arizona and Montana. While he does have some offers currently for himself, he is worthy of many more offers, as he is a commodity in the country for the 2021 Class - a true big that plays with aggression and competes hard on both ends of the floor.

Not being seen this spring and summer would have been big for Brennan, but, most likely, he will wait late anyway to sign, which will benefit him nicely, as he will be playing a National Schedule now during his senior season. Recently, Brennan decided to transfer from Perry High School to Eduprize High School, which now has added a National Prep team to their program. As a result, Brennan will play against top-rated competition now during his senior season, and gain maximum exposure to college coaches, which should raise his recruiting stock throughout the year.

Brennan should raise a lot of eyebrows from college coaches throughout the year also because of his much improved offensive skillset, which allows him to score inside and out. Last weekend in the game I watched, he connected on (5) different perimeter shots in a row in the first game I watched - very impressive for such a physical talent.

I will look forward to watching Brennan throughout his senior season, and expect this young man to become one of the hottest prospects late in the spring for Arizona's 2021 Class.

Arizona Hoop Review Scouting Report: Brennan is a rare find among low post prospects today, as he is very physical and plays as big as his size suggests - competing at a high level on both ends of the floor. He is very active on the glass and is a strong finisher around the paint - getting to the free-throw line quite often, as a result of his tough, hard-nosed play. Brennan has good low-post footwork that allows him to get off in the low post with jump hooks and sheer force when he attacks the rim. Trys to dunk most attempts, which I like - proving his lift off the floor and his aggression around the basket. He is a good shooter with a soft touch from the perimeter and has much improved range on his shot. An active rebounder that rebounds outside of his area, and is a strong finisher around the basket and runs the floor hard. Runs the floor well for his size. A good shotblocker that contests shots. A good low-post defender that accepts challenges on the court. A sleeper prospect that continues to improve. Has excellent potential long term.