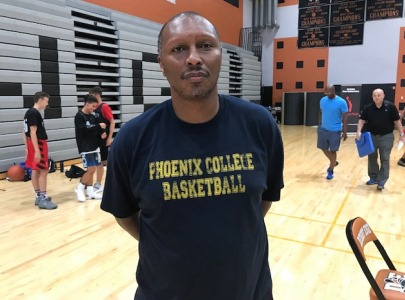 This season will see a lot of new changes in the Arizona Community College Athletic Conference (ACCAC), as there will be new coaches in the conference and, of course, new players.  One major change in the conference this season will be the departure of former Phoenix College head coach Matt Gordon, and the addition of new head coach Duane Eason at Phoenix College.  Once an assistant coach at the program, Eason will now take over for Gordon after a very successful season as the head coach at Mountain Pointe High School, where Eason led the program to a 6A State Championship runner-up finish.

A former college coach and a native of New Jersey, Eason comes from a tough, hard-nosed background where basketball players play for the love of the game and for a better life.  In New Jersey, for some kids, if they don't go to school on a daily basis, they don't eat.  The game of basketball is not just an option for many kids on the East Coast, instead, for many, it is the only way for an opportunity at a better life.  It is this type of hunger to play the game that Eason has brought with him to the state of Arizona.

After spending a year as an assistant coach under Gordon just a year ago, Eason will now take over the helm after doing an excellent job at Mountain Pointe High School last season.  In just one year as the head coach at Mountain Pointe HS, Eason was terrific - leading the Pride program to a nice 26-4 overall record on the season - coming up just short of winning a state championship.  An amazing feat by Eason in his first year as head coach, and also while being from another state entirely.  What Eason proved is that basketball is basketball, and that no matter where it is played, it is the same - play hard and play to win.

Eason has now moved up the coaching ranks faster than anyone that we have seen in some time, as he has received two different head coaching positions within a two-year stint - and both opportunities being among the best the state has to offer.

Phoenix College has risen to the class of the ACCAC Conference, after Gordon and his staff won a National Championship, and also won numerous conference titles over the past 10 years.  As a result, Phoenix College, while a division-II program, is now regarded as the class of the conference.  Eason will have his work cut out for him at the program, as he will look to keep the party going and bring in top-rated talent locally and abroad.  Eason is a tireless worker though, so he should have no problems making it happen to the best of his ability, while Gordon had done all he could do at the program before moving on.  The time had come for Gordon to make a move for himself and his family, and now the time has come for Eason to make his move at the program as well.

Eason will definitely have his work cut out for him this season, but i expect him to soar in the division, as a result of his tough, hard-nosed brand of basketball that he teaches and the tireless work ethic that he brings with him.

Good luck to Coach Eason and his new staff this season, and also in the future, as he takes over at Phoenix College, and looks to continue to winning tradition left by Gordon, and also the winning ways that have made him a desired applicant for each coaching position that he has sought after.