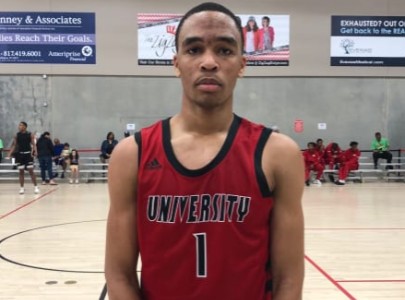 It was another big announcement for an Arizona basketball prospect, and even though he was an implant from Houston, Texas, no effect was no less inspirational as Dream City Christian Prep's 6-foot-5 senior wing Tyler Simon gave a big commitment to an historic Ivy League basketball program last weekend. In amazing fashion and on a video created by our Arizona Preps' staff, Simon announced his big commitment to the world.

With numerous options for himself from many high-major Division-I programs, Simon decided to pursue a program with the strongest academics, as he chose to give a commitment to Harvard University and Head Coach Tommy Amaker and his coaching staff.

In the video released by Simon, he showed off his work ethic and focus on his craft, while providing commentary in the background that provided some insight into who he is as a person. While wearing a nice suit and looking very academic, Simon released his decision - giving Dream City Christian Prep another Division-I commit before the fall signing period. Simon will also join teammate Demari Williams, who recently gave a nice verbal commitment to Arizona State and Alex Tchikou, who is headed to the University of Alabama.

A native of Houston, Texas, Simon is a sharp-shooting bigger guard prospect that has an excellent feel for the game, and is a big-time offensive talent. He has a very pure shooting stroke with excellent range on his shot, and a nice mid-range game which helps to separate him as a player. He is a good ball handler and has very good overall versatility as a player, which will benefit the Dream City coaching staff nicely this season. Dream City is absolutely loaded this season, and will be one of the elite prep programs in the country this season. Simon will be a very good piece to a team so loaded with individual talent, as he provides steady offense and good overall play-making skills.

Congratulations again to Simon and the Dream City Christian program on this big commitment from our Arizona Preps' staff. Simon is definitely a nice role model for other student-athletes, as he has proven himself on and off the basketball court at a high level.