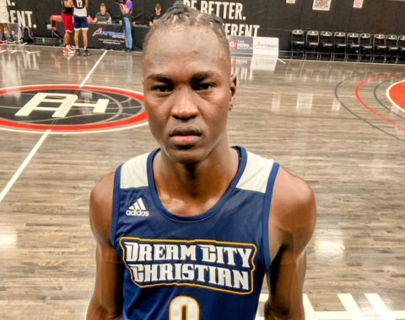 One of the top overall prospects in Arizona's 2023 Senior Class is now off the recruiting board, and is expected to sign a national letter of intent this week during the NCAA's Early Signing Period. Dream City Christian Prep's talented 6-foot-8, 210-pound senior wing David Tubek is a nice talent with size and an advanced offensive skillset. One of my favorite overall prospects in the class, Tubek has given a big verbal commitment to the University of Memphis and terrific Head Coach Penny Hardaway and his men's basketball staff.

Memphis is getting a very nice prospect from the 2023 Class, as I believe Tubek was a very underrated prospect. Tubek has previously played in a support role for a loaded Dream City Christian National Team, which featured loads of Division-I prospects, and even a few NBA prospects. As a result, Tubek took a backseat role in the scoring department and focused on his rebounding and defense for the team - looking to do the intangibles to help his team win games. This prep season, in his final go-around, Tubek will be relied on much more heavily to score and lead this year's team, as Dream City will have many new faces. Tubek will be the catalyst for this year's team and the leader. While not a vocal leader, Tubek instead leads with his play and intensity.

Dream City Christian Prep is among the nation's elite prep programs, and is coming off having two different first-round NBA Draft picks in this summer's NBA Draft (2022), as Shaedon Sharpe (Portland Trailblazers) and MarJon Beauchamp (Milwaukee Bucks) both were drafted in the first round. The program continues to soar also, as the Dream City program expects (3) more of their past players to be drafted in next year's draft (2023) - an amazing feat for a prep program.

Congratulations to David Tubek on this accomplishment, as well as the Dream City Christian Prep program on another big-time Division-I commitment and signing.

Arizona Hoop Review Scouting Report: A native of South Sudan, Dubek has excellent physical size at 6-8 in height and is a very versatile performer - able to score inside and out. Don't let his size fool you though, as he is a big wing prospect with a pure shooting stroke and excellent range on his shot. He has a quick release on his shot, and is able to get his shot off nicely from longer ranges and with consistency. A pure shooter of the basketball, Dubek is actually one of the very best shooters in the 2023 Class. He is also a very good athlete with a terrific physical makeup. He has a high-major college-ready body and excellent physical strength for a young man. He is fundamentally sound and has a very good handle of the basketball and is also a good passer that looks to find the open man on the floor, and is very coachable. A strong rebounder that has good work ethic and competes. A good defender that plays passing lanes. Continued focus defensively on the ball will maximize his potential as a player.