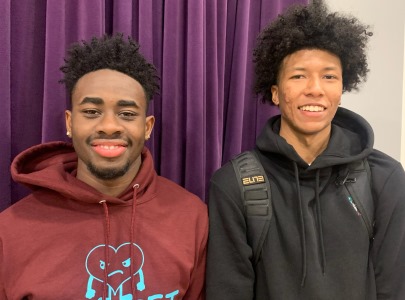 Dream City Christian Prep is in their first year of operations, but the program has quickly become one of the hottest prep programs in America, after a tremendous start to the prep school season. With numerous big wins early in the season, Dream City advanced to the tournament finals this weekend in the Grind Session's Duel in the Desert event held on their campus at Dream City Christian School in North Phoenix. The final championship match-up of the event was an epic one, as a loaded Prolific Prep (CA) team would just squeak past Dream City Christian on a last-second shot heave from half-court - giving Prolific Prep the big 66-63 victory in the tournament final.

The game was intense from start to finish, as these two powerhouse prep programs matched up - a game which included a serious individual match-up between Prolific Prep's superstar 6-foot-5, 180-pound senior guard/forward Jalen Green and Dream City Christian's 6-foot-6, 180-pound senior wing MarJon Beauchamp. This match-up really was the story, as these two top performers went at it all game, and both came up big for their respective teams. Both prospects are considered among the elite at their positions in the country.

While this match-up was the story going into the game, another exciting match-up was brewing as well during the game, as Prolific's 6-foot-3 senior guard Nimari Burnett (Texas Tech signee) and Dream City's 6-foot-3 senior guard Jalin Anderson (UC-Riverside signee) would also provide an excellent match-up. Burnett is one of the elite guards in the country and is difficult guard for any opposing team, while Anderson is a much less heralded prospect, but can compete with any guard in America. Anderson's last second shot on Friday evening lifted Dream City past a talented Trinity International (NV) team, 63-62.

Prolific would get out to a quick and early lead in the contest, 12-3, with 13:06 left to play in the first half, after a monster dunk in transition from Burnett. But Dream City would fight right back, as Beauchamp would ignite his team. After a mid-range jumper from Beauchamp, then two-consecutive three-pointers from Beauchamp, concluded by a second one in transition with 3:37 left to play in the half, would pull Dream City to within one point, 26-25.

The two teams battle with one another all half, with neither team able to make any real run towards extending their lead. Both teams would go into the half with Prolific Prep holding on to a one-point lead, 32-31.

Down the final stretch, Prolific and Dream City would look to win the contest with good possessions, but after a nice no-look pass from Jalin Anderson would go through the hands of a wide open Maj Dusanic underneath the basket, Prolific would get the basketball back. Determined to win the game for his team, Anderson would create a steal from Prolific's Burnett - giving Dream City back the basketball with 10.9 seconds left to play in regulation.

After a scoring attempt, Dream City's Beauchamp would get fouled on a play, sending him to the free-throw line for the first of a 1:1 attempt, with the score tied at 63. Unfortunately for Beauchamp, he would miss the front-end of the 1:1, and a long rebound would deflect out to the perimeter, where Prolific's Burnett would tap the ball to himself and heave a bomb from half-court at the buzzer. After the buzzer would sound loud in the gymnasium, the basketball would ricochet off the backboard and go in - giving Prolific Prep the championship victory, 66-63.

There were absolutely no losers in this contest, as both teams competed hard and provided a high-level contest and finish for all baskeball enthusiasts in attendance. The Grind Session event and the organization have done an excellent job over the years in creating an amazing league filled with the top prep programs and players in the country. The games are always exciting and high-level. The gym was filled with spectators for last night's final game, and as more layman Arizona basketball fans learn more about the sport and desire to see the best it has to offer, this event will continue to grow for the casual fan.

Notes: Dream City Christian has been on a tear this season, and the addition of 6-foot-11 junior forward Alex Tchikou will pay off serious dividends for them in the future. While Tchikou did not play particularly well for Dream City in their final match-up with Prolific Prep on Saturday evening, he has loads of potential as a player and for the future. A definite high-major Division-I prospect, he has a super long, rangy frame and a nice offensive skillset that allows him to handle the basketball in the open floor and play on the perimeter, where he is a capable three-point shooter with range. As he matures physically over the next year and continues to develop as a player, Tchikou should be able to help this team a great deal, and will receive his tremendous share of college recruitment in the process.