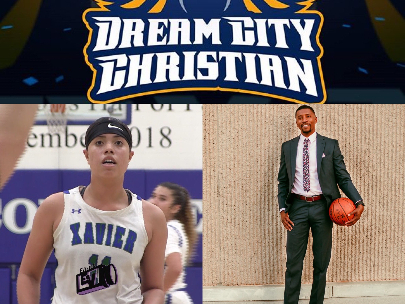 Dream City is not playing around also, as the hiring of Prileu Davis also has created a major shift in girl's high school basketball, as our #1 overall prospect in Arizona's 2023 Class, 6-foot-1 sophomore guard/forward Mia Davis, will be leaving Xavier Prep now and heading to Dream City Christian to play for her father. This seems like a dream come true for the Davis family, as Prileu is among the state's top developers of talent, and was instrumental in the sheer development of Mia Davis, a superb prospect with an advanced skill-set and glaring promise and potential for the future.

Prileu Davis was a tremendous talent in his own right as a player. A graduate and State Champion at Moon Valley High School in the mid-1990's, Davis also led the ACCAC in scoring at Phoenix College, before accepting a big-time scholarship to the University of Louisville, where he played considerable minutes for the historic ACC basketball program. After a professional playing career, Davis returned to the valley and has become a stable for player development in North Phoenix.

Mia Davis (pictured) is a highly skilled young prospect that emerged as an elite prospect early on in her development, and is currently rated among the nation's elite 2023 prospects by ESPN. She is a very skilled guard prospect that can play anywhere on the floor, and is a nightmare match-up for opposing defenders. She can score the basketball with excellent range on her shot, and also has a very good mid-range game that allows her to operate inside of the three-point arc. Very crafty and skilled, Davis has an excellent handle of the basketball and keeps defenders on their toes with her ability to stop and go on a dime, and make plays for herself and her teammates. She makes players around her better, which is absolutely rare for a prospect her age. She is a well-rounded fundamentally sound performer with a lot in her offensive bag.

Davis will soon begin to generate loads of Division-I offers for herself, as college programs will begin to lineup for her. Davis is currently rated as the #13 overall prospect in America's 2023 Class by ESPN - an absolute honor for such a young Arizona basketball prospect. Over time, this young prospect will change the game and help take Arizona girl's basketball in the state to another level.

Last season, AZ Compass Prep took the state by storm when they developed their girl's basketball program to a new level, bringing in loads of top-rated talent to the program. The Bella Vista Prep girl's program has also reached new heights with their program's focus on developing their program, and bringing in top-notch international talent from all over the world. The Arizona Elite Prep program is loaded with some top-rated prospects as well, and is on the rise in the state. The PHH Prep girl's basketball program won the girl's Grind Session National Championship last season, and is absolutely loaded from top to bottom - filled with numerous Division-I prospects at every level and in each class. PHH Prep is the trend setter among Arizona girl's programs in the state, and has a lot to offer their girl's student-athletes.

It is just a matter of time, as I stated during last season, that girl's basketball will reach a new level and become the example for girl's prep programs around the country. This new announcement by Dream City Christian will definitely have a major ripple effect, as many other top-rated girls basketball prospects could change locations - leaving their high school programs for the lure to compete on the Grind Session against the best teams and players. Players want to be challenged, and, ultimately, they want to be recruited. It is an unavoidable fact that is difficult to avoid or challenge. This huge move by Mia Davis could attract many more top-rated girls to the Dream City program as well.

The exciting fact is that each of the girl's prep programs in the state are on the rise, and this is just a splash in the girl's basketball culture that will, most likely, be the catalyst for many more elite prospects following suit - locally and nationally.