Dre Harris Goes To Another Level 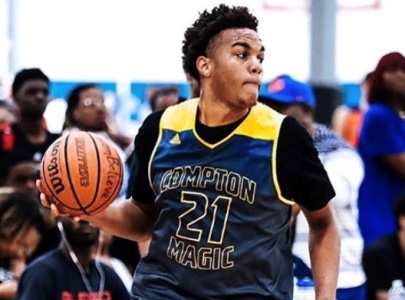 One of the top overall performers in Arizona's 2020 Class is Hillcrest Prep Academy 6-foot-7, 250-pound senior forward Dre Harris. After a very good junior season for Hillcrest, after transferring from Bella Vista Prep early in the season, Harris decided to turn up this club season, while traveling with the highly acclaimed Compton Magic (CA). This weekend in Las Vegas, Harris helped lead the Compton Magic to a championship victory of the Fantastic 40 event organized by Dinos Trigonis.

Harris has been consistent in his play throughout the spring and summer, while playing alongside some of the nation's elite national talent with the Magic, including the nation's #1 overall 2020 prospect, Evan Mobley (USC commit). Harris found his fit with the team and provided toughness, rebounding and a bruising offensive style of play which benefited the Magic team nicely, as Harris complimented his teammates well and provided the dirty work for the team, much like a Draymond Green-type (NBA).

As a result of Harris strong play this club season, he has earned a nice list of offers for himself. He would receive an offer this weekend from the University of New Mexico, as a result of his strong play in the championship victory. Harris also already has offers from TCU, St. John's, Washington State, Grand Canyon, Duquesne, UC-Irvine, Oakland, Tulsa, Charlotte, UTEP, Montana and Central Arkansas.

Harris will have a difficult time trying to decide on a college program for himself, with so many different offers on the table. He should also begin to pick up some more late offers soon, as a result of his play last weekend. It will, however, be very important which school he chooses ultimately, since he will need to play for a college program that will know how to utilize his skillset and unique approach to the game.

There are very few, if any, other players in the state like Harris.  This young man possesses excellent physical size on a strong frame that also has very good length of body. He has excellent versatility and is able to play several different positions on the floor, which makes him very difficult to defend for opposing teams and players.  He is a mis-match consistently for teams, as he is physically bigger and stronger than most post opposition he faces. He also has the mobility to also play on the perimeter, although he is at his best around the paint.

I will continue to follow the recruitment of Harris closely this fall, as he nears his difficult college decision. I will bring you updates as they continue to develop.

Arizona Hoop Review Scouting Report:  Harris is a wide-body low post player that likes to score around the basket and from mid-range.  He has solid low post skills and a nice ability to use his body to draw contact and finish around the paint.  He is also able to step outside and shoot the basketball out to three-point distance, although he still needs to add more consistency to his shot.  Currently, he is a good mid-range shooter with a soft touch.  I like Harris physically, as he has very broad shoulders and excellent physical strength.  He can score inside and out and is difficult to keep off the glass.  He is a bit of a tweener for the college level, but such players like him often have very good success in college - he will just need to pick the right college program for himself, and that will be a good fit for his talent. A strong rebounder and finisher around the basket.  Runs the floor.  A solid passer.  A good shotblocker.  A solid low-post defender, but needs more focus on the defensive end to maximize his potential as a player.  Has some upside.