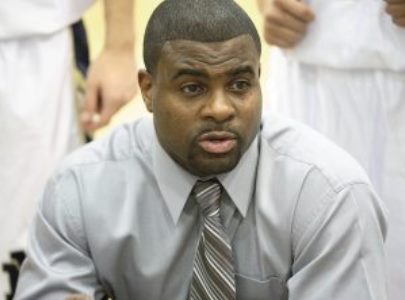 Harris was a big-time winner during his high school basketball career in Arizona, while dominating the state as a player.  Since his playing his career, he has turned his focus to coaching.  After a solid college coaching career, Harris has given back to the state of Arizona through coaching in the high school ranks - developing a large number of Arizona's prospects over the past 20 years, and developing them for the college level.

As a player, Harris was tremendous, and was one of the very best ever to wear a Corona uniform, which is saying a lot.  While there have been many star prospects to come out of the Corona Del Sol basketball program, Harris is one that laid the foundation for he storied basketball program.  While playing for legendary Arizona high school basketball coach Sam Duane Sr., Harris flourished - leading the Aztecs to the state final each year during his high school career, and winning it all in his junior season.  Harris averaged nearly 25 points per/game in his senior season, and was selected as the Arizona Republic's Player of the Year in 1990.  Harris ranks among the state's all-time best scorers of the basketball in Arizona history.

After his illustrious high school basketball career, Harris signed a division-I scholarship with Fresno State, before eventually transferring to the University of San Diego (USD), where he finished his a strong playing career.  Harris received his Bachelor's Degree in Communications from USD.

Harris then began a college coaching career, which included a stint with Cal Poly Pomona, a strong division-II program in California.

After coaching in the collegiate ranks, Harris realized the impact he would have on Arizona's basketball talent, and turned his focus to coaching in the Arizona high school ranks.  Harris would take over the Desert Vista basketball program, which was a newer program, but had already had a lot of success.  He led Desert Vista to a state championship in 2008, and compiled a 112-42 record in six years as head coach.

Harris is the only basketball player in Arizona history to ever win a state title as a player, and as a coach - an amazing feat.

Since his successful coaching career at Desert Vista, Harris has since taken over the Hamilton basketball program, which he took over in April of 2015.  After taking over a struggling program that he would have to rebuild, Harris would finish with a 10-18 record in his first season at the helm, but would bounce back in his second season (2016-2017) to compile a strong 17-11 record, and leading the program to the state playoffs - a nice accomplishment.

This season, the Hamilton varsity team is among the top teams in the state, while also having a strong junior varsity and freshman team for the future.  The Hamilton varsity team has a 14-5 overall record this season, with a big win over his alma mater, Corona del Sol (63-51), a nice win over Millennium (63-52), a nice overtime win over Perry (58-55), a win over defending state champion Basha HS (51-35), and a narrow loss to a very good Brophy team (47-48).

"I hope to make the players that I'm fortunate to coach better people, and assist in their dreams and goals," said Harris.

Harris worked hard in his playing career to become one of the state's best to ever do it, but he has worked just as hard as a developer of young men, as a coach and as a teacher.

"I am very passionate and inspired, as it relates to education and truly believe that I have a tremendous responsibility as an educator," said Harris.  "I believe that all students are capable learners with reliable resources and support."

Harris and his rich basketball family, have done a lot for the state of Arizona, in many ways.  His brothers include older brother Willie Harris, his twin brother Dave Harris, who also starred at Corona,  and younger brother Dion Caroline - both of whom were also top-rated Arizona basketball performers.  Dave Harris played at Central Arizona College and then Metro State, while Caroline played at Northland Pioneer JC before moving on to Sam Houston State.

Harris has the Hamilton basketball program headed to the top, and definitely in the right direction.  His commitment to excellence, on and off the floor, has done a lot to develop the young men that he has worked with.

As a youngster myself, and someone that played against Doug Harris in high school, and also has marveled at his playing and coaching career, he is one of the very best to ever come out of this state.  He was a serious player that won at an extremely high level, and has done much of the same as a high school coach in our state.  While many young players coming up today do not know his exploits as a player, just know that if you have the opportunity to learn from him - you are learning from the best.  A man that has played at the highest level, and also coached in college.  He has done it at every level and knows exactly what it takes to be successful.

Thank you Doug Harris for bringing respect to the state of Arizona as a player, and now developing today's Arizona players for the future.