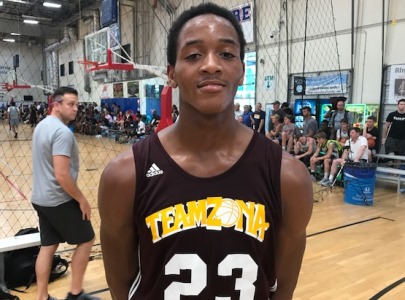 Arizona Preps ventured to Anaheim, California this weekend to watch this year's Double Pump Spring Tip-Off at the large and busy American Sports Center.  With close to 30 courts in action at one time, this year's event was well organized and filled with talented prospects.  I was able to watch the majority of Arizona prospects in action on the day, and here are the top individual performers I watched in the event . . .

Simmons played in this weekend's event with a talented Splash City (CA) program.  Simmons played very well for himself, although his team failed to go deep into the tournament.  Simmons has an excellent body already, and is also able to step outside to the 3-point line, where he is able to hit shots.  Was very consistent in his shooting stroke from longer ranges this weekend.  Has a nice mid-range game.  Able to score off the dribble and finish plays inside the paint and around defenders.  A good ball handler with good versatility.  A solid rebounder that needs to focus more in this area of his game.  Good open court player and slasher.  An active on-ball defender that plays passing lanes and gets deflections.  Has very good size. Should be an immediate contributor for a college program.  Starting to generate interest from numerous programs as a result of last weekend's performance.

Handy-Johnson (pictured) was the surprise prospect that I saw in action last week/weekend.  He is a big-time sleeper prospect that has excellent length, broad shoulders and superior athleticism.  He has a good motor and makes plays on both ends of the floor at a high level.  A strong two-way player.  A solid shooter that needs to add range on his shot consistently to maximize his potential as a player.  A solid ball handler and passer.  Has good versatility.  An excellent finisher.  An active and strong rebounder and shotblocker.  Runs the floor and is very good in the open floor.  Has excellent potential for the future with good upside.  Has the potential to become a serious division-I talent over time.  Already is a mid-major prospect, but with a year or two of juco he could become a high-major prospect.  Still undecided as to where he will go to school, and is well-below the recruiting radar.

An athletic and physically strong prospect that has good versatility and is a stretch 4-man that is capable of playing inside and out.  He has a high motor and gets a lot done around the paint.  He is a good shooter from mid-range and also can extend to three-point distance, but is at his best around the paint, where he is able to make plays and finish strong at the rim.  A very good finisher that does not mind physical contact.  An active rebounder and shotblocker.  Runs the floor hard.  Has excellent work ethic.  A very good sleeper prospect that will be able to help any program immediately, as a result of his ready-made body and level of intensity he plays with.  A great prospect late.

Related to former NBA player and Suns announcer Eddie Johnson, Jacob is a skilled guard prospect with a good overall feel for the game and a nice approach to the game. Being around the game of basketball all of his life, this young man loves the game of basketball and it shows in his ability to play. He takes the game very serious and has a lot of self-confidence in his ability to play the game at a high level - a nice attribute for Johnson.  Johnson has very good size for the point guard position, and is also capable of playing as a combo-guard as a result of his ability to shoot and score the basketball.  He has a good feel for the game also, and has a good understanding of when the score or set up teammates on the floor. He knows how to run a team very well and also has good leadership qualities. He is an effective ball handler and passer and is simply a solid all-around guard prospect for a good smaller college program.  He is also a very good student, and is already a full academic qualifier.

Reagan continues to play well for himself, although he continues to soar below the recruiting radar.  College programs need to figure this young man out, as he has really intrigued me over the past several months.  He has excellent length and athleticism which allows him to make plays for himself off the dribble - whether from the perimeter or around the paint.  He has a good perimeter shooting stroke with range.  Has a good mid-range game as well.  He has excellent length of body and a long wingspan, which makes him difficult to keep off the glass, and also makes him an excellent finisher around the basket.  A strong rebounder.  An excellent finisher.  Runs the floor well.  A solid ball handler and passer.  Has a lot of potential.

Hudson is a sharp-shooting 2/3 prospect with a nice shooting stroke with unlimited range on his shot.  While he did not make most of his shots this weekend, he has a pure shooting stroke and feels he can hit anything when given the opportunity.  Plays with excellent confidence on the floor.  A very good ball handler and passer that sees the floor and has an excellent overall feel for the game.  A solid athlete.  Very crafty in his approach to the game.  Has a high basketball IQ.  A good rebounder.  Solid defender.  An intriguing prospect that I will continue to watch.

Martin is an athletic and well-built physical specimen at the guard position.  He has very good athleticism and a good overall motor, which allows him to make plays nicely and often.  He does not mind physical contact and is a good finisher in the lane, especially after drawing contact from opposing defenders.  He finished several and-one plays in the two games I saw him compete.  A solid shooter, but at his best from mid-range.  Good scorer around the basket, and a very good finisher.  An active rebounder.  Good overall defender.  Has a good motor.  An intriguing prospect.

Greabell is a skilled floor general that is capable of playing both guard positions on the floor, as a result of his size, feel for the game and ability to shoot the basketball from the perimeter.  A crafty guard prospect that makes plays for himself and others.  A good shooter with range, and also likes to score off the dribble.  A solid finisher in the lane.  Needs to get physically stronger and add size to his thin frame to maximize his potential as a college prospect.  A very good ball handler and passer.  A solid defender.  A good rebounder.  Pushes the ball up the floor.  A nice sleeper prospect for a smaller program.

Talley has excellent size and versatility with good physical size and strength. He also has a very good offensive skillset that allows him to play several positions o0n the floor. Talley is a guard/forward prospect currently that likes to play inside and out. He is able to score effectively around the paint, and also has a nice ability to step outside and shoot the basketball as well with a good shooting stroke. Talley has a very good handle of the basketball, and likes to have the basketball in his hands. He has a very good mid-range game, which allows him to score effectively around the paint and from the perimeter. I would like to see him in the post much more where he can score over smaller defenders. Has a good overall skill level and good potential for the future, as long as he stays in shape.

Hawkins is a rapidly developing prospect that has really improved over the past several months, and looks to be one of the better prospects now in the 2019 class in the state. A skilled wing prospect that is able to play several positions on the floor. Has a good overall feel for the game. A very good ball handler and passer that sees the floor. A good shooter with range, but at his best from mid-range where he is able to create off the dribble. A good open court player and slasher. A solid rebounder. As he continues to get stronger physically, he will maximize his college recruitment. Has upside. An excellent sleeper prospect.  Played all (3) perimeter positions for his team in this event.  On the rise.

Braun is a bigger stretch 4-man prospect with a nice overall skill level and an ability to score inside and out.  He has a lot of potential for the future, and is still realizing how to utilize his skillset to be effective on the floor.  He is a solid shooter from mid-range, and is capable of stretching the floor and stepping outside to the perimeter, but he is definitely at his best inside 18 feet.  A good low post player with good low-post footwork.  An active rebounder  and a capable shotblocker.  Runs the floor well.  A solid finisher.  Has excellent potential for the future, and is a very good sleeper prospect.  The level he ultimately lands at will depend on his continued work ethic.

Self is a very electric point guard prospect with a high motor and an advanced skillset.  He is an excellent shooter with a quick release on his shot, and range which makes him difficult to defend.  Very quick off the dribble and a good finisher at the rim.  Able to score over bigger defenders.  Would like to see him penetrate more, as he has the quickness to blow by defenders almost at will, but will need to set up his drives with more hesitation dribbles.  A very good ball handler and passer that pushes the ball up the floor.  An excellent defender with exceptional lateral quickness.  Has very good potential for the future.

Jones plays inspired basketball and makes up for his lack of size with excellent athleticism and quickness.  He has excellent anticipation in the passing lanes, and gets steals and deflections as a result.  While small in stature and size, Jones is a high-scoring point guard prospect that is capable of playing both guard positions on the floor, but will need to become a point guard exclusively due to his lack of physical size. It will be very interesting to see how much he continues to grow physically over the next couple years.  Jones can score with the best of them though, and he is difficult to keep out of the lane, where he is a very good finisher. He is very explosive for his size. His best attribute though will be in his ability to become a lock-down defender. He has the lateral quickness and anticipation to put a lot of defensive pressure on opposing offenses.