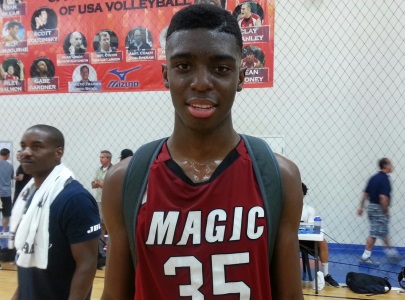 South Mountain High School's 6-foot-8 senior forward and nationally ranked Top 50 prospect Zylan Cheatham is on an official recruiting visit to the University of New Mexico this weekend. Lobo fans filled their gymnasium, The PIT, on Friday evening and expressed their desire to have Cheatham in a Lobos' uniform next season.
Share
Facebook Twitter LinkedIn WhatsApp Pinterest Email

This year's very large Double Pump Best of Summer NCAA Certified basketball tournament being held in Anaheim, CA, has not disappointed this year, as the event has been very large.  With 32 different courts going at the same time at the American Sports Complex, this year's event looks colossal in scope and has created an atmosphere for big-time basketball.

With loads of college coaches walking around the venue and taking in the basketball action, the competition has been fierce as the top basketball prospects in the West have come together in an attempt to raise their recruiting stock.  Tournament organizers, David and Dana Pump have done their best job in recent memory of developing such a well organized and large event.  Tournament Directors Phil and Jan Bryant have been as busy as I have ever seen them at this year's tournament.

While I missed the action of day one of this year's event (traveling), day two of the tournament belonged to Westwind Prep 6-foot-8 senior forward Zylan Cheatham, who looks to be as good a prospect as there is in this year's entire tournament.  While previously playing for the California Supreme (CA) in the spring and early in July, Cheatham comes into this week's event attempting to prove that he is not a stretch-four man, but rather a point forward prospect.  While leading his Arizona Magic Pump N Run-2014 squad to two nice wins on Thursday, Cheatham looked much more comfortable and with a nice smile on his face while playing with the basketball in his hands for much of the game.  After spending the last several months running the baseline and without the basketball in his hands, head coach Jeff De Laveaga woud put the basketball in Cheatham's hands for both victories on the day.  Even with talented 6-foot senior point guard Rolando Rhymes and Westwind's 6-foot-3 senior guard Tate De Laveaga in the backcourt and playing very well for the Magic, Cheatham's talent with the basketball in his hands is convincing and glaring to the fans in attendance.

On Thursday at this year's event, Cheatham's court while playing with his team was flooded with passers by and onlookers - looking to catch a glimpse of Cheatham soaring through the air and finishing a dunk over a defender.  While Cheatham's shot still needs some work, his ability to make plays and play with a level of superb athleticism on the court is unmatched by his opponents.  It has been a joy to watch Cheatham thus far, and I will look to see just how far he can take his team in this year's event.  This Arizona Magic group of prospects look really good and have all of the pieces to go deep into this tournament . . .

Westwind Prep 6-foot-3 senior guard Tate De Laveaga (Northern Arizona commit) is an absolute steal for Northern Arizona head coach Jack Murphy and his basketball staff.  De Laveaga played exceptionally well this spring and now has even raised his play in the summer.  In front of numerous college coaches and NAU's Murphy on Thursday evening, De Laveaga made numerous big plays down the stretch for his team's narrow double-overtime victory over BTI Select (CA).  In the come-from-behind victory for the Magic, De Laveaga knocked down a big three-pointer to tie the game, and then dribbled the clock down before driving to the basket and scoring over a defender at the buzzer.  After switching hands in the air and scoring the left-handed layup over the defender as the buzzer sounded, Tate showed his superior toughness as a player and high level of confidence - nice attributes.  Tate's physical presence on the basketball court is strong and he looks like a division-I guard already . . .

Gilbert High School's tough and hard-nosed 5-foot-11 senior point guard Anthony Bryant is as tough a basketball prospect as there is in the state of Arizona on the basketball court.  This true point guard prospect competes at a very high level and on both ends of the floor.  Bryant is a relentless defender that takes his opposition to the point where they no longer want to play the game - I love watching this young man play the game of basketball.  Bryant is the kind of player that helps teams win championships.  This young man has led his Passion For Ball - Magic team to a successful showing thus far in this year's event.  Look for Bryant to make a climb in our next player rankings.  Bryant has developed into a serious potential division-I prospect, simply because of his toughness and defensive strength . . .

Queen Creek HS 6-foot-4 senior guard Carter Wilson has been a pleasant surprise this club season - scoring the basketball and shooting the basketball at a high clip all spring.  I recently forgot Carter's name when I was thinking about him as a prospect, but I wont forget his name again, as Carter has been playing his best basketball of his young career this spring and summer.  Wilson shot the basketball well again on Thursday - knocking down three-point shots with range and regularity, while also driving hard to the basket and finishing plays.  Wilson is a nice talent that has really developed over the past 6 months, and now has become a serious college prospect for a smaller college program looking for an athletic guard prospect with an excellent shooting stroke and a good competitive spirit . . .

Perry HS 6-fo0t-6 senior forward Jake Mortensen is not a household name as of yet, but he will be very soon.  This talented forward prospect has excellent versatility as a player and has a high skill level.  Coming out of nowhere in the spring, Mortensen jumped into the AAU/club circuit in the spring and became a top-rated prospect in the state overnight.  Mortensen now is now among the top overall prospects in the state's 2014 class, after posting a spring performance that helped his club team to two different tournament titles.  Thursday, Mortensen continued his strong play and has raised the eyebrows of numerous smaller school college coaches as a result.  This talented 3/4 prospect has the potential to play division-I basketball at a lower level or at a strong division-II program.  If he keeps it up this July and his team can continue to win at a high clip, as they have, look out as Mortensen could benefit a great deal in his recruitment as a result . . .

Brophy Prep HS 6-foot-2 sophomore guard Brock Brunkhorst is a nice young talent that really knows how to play the game, and he should since his father was a basketball legend at the University of Arizona in the 1980's.  Brunkhorst is leading a very loaded group of 2016 prospects in this year's event, and in the 16 & Under Division.  Brunkhorst played very strong in the game I saw him in on Thursday.  He scored the basketball from three-point distance consistently, scored on dribble drives to the basket and simply made the right plays for his team to win.  Teaming up with other top-rated prospects such as Westview HS sophomore guard Kendall Barnes, Pinnacle HS talented post Andrew Elliott and talented incoming freshman prospect Justice Sueing, this group of players will go very deep in the tournament, even though they are playing up by one year.