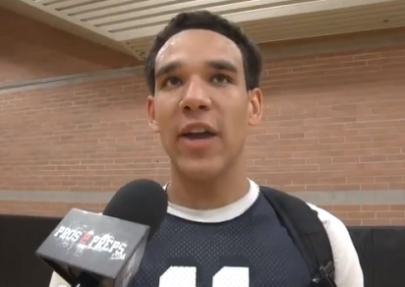 One of the top overall prospects in Arizona's loaded 2014 class has decided to trim his recruiting list, down to 7 college programs that he will consider for his fall college decision.  Pinnacle High School's sharp-shooting and talented 6-foot-5 senior guard/forward Dorian Pickens advised me this week that he currently plans to make a fall decision, but only after taking official recruiting visits to the schools of his choice.

I caught up with Pickens this week while watching him workout in a North Scottsdale training session held by Scottsdale-based trainer BJ Letcher.  After the workout, Pickens advised me that he will decide from 7 different college programs - Arizona State, Gonzaga, Oregon, Stanford, USC, Oklahoma State and UCLA.

Pickens advised me me that he does not currently have a clear leader in his college recruitment, but that he is hopeful that he will be able to make a decision soon.

"We will see what happens," said Pickens who is still mulling over his recruiting options.

Pickens led his Pinnacle HS team last season to a big Division-I state championship runner-up finish, after losing a first half lead to eventual D-I state champ Corona Del Sol HS in the second half.  Pickens averaged 17.8 points, 8.0 rebounds and 2.7 steals per game while shooting 55 percent from the floor as a junior.

While receiving a high national ranking as a sophomore prospect from many national recruiting sites and services, Pickens saw his ranking nationally among the 2014 class take a hit this spring and summer after competing on the spring and summer AAU/club circuit - while different college programs continue to pursue the talented wing prospect.

Pickens shared time this spring and summer with The Magic (AZ), a version of the Compton Magic (CA) program, and also the heavily Nike-sponsored Oakland Soldiers (CA).

Pickens is a very talented and gifted shooter with excellent size for the position and a fundamentally sound approach to the game.  He is among the most gifted prospects in Arizona's loaded 2014 class and will have a big senior season for a loaded Pinnacle HS team that will challenge for a Division-I state title again this season.

It will be very important to see which school Pickens lands at, since the right college fit for him will make a big difference in his ability to come in and play right away.  Pickens' pure ability to shoot the basketball with unlimited range and off the dribble is a big lost art in the game today, and should make the college program of his choice very happy in the future.

Arizona Preps will continue to follow the college recruitment of Dorian Pickens closely and bring you any updates as they continue to develop.