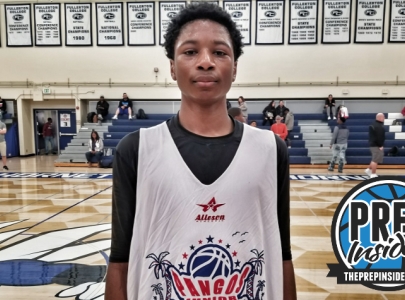 Arizona's 2022 Class of prospects is absolutely loaded at the highest level and looks to definitely be the best class of prospects since 2014, and possibly ever.  The class is filled with young prospects that have already received raving national attention, and Hillcrest Prep's 6-foot-4 freshman guard prospect Dorell Thomas is one young prospect that is generating serious recruiting attention for himself early in the process.

While Thomas is a definite high-major division-I prospect for the future, many college programs will look to position themselves early in the recruiting process with Thomas, as Wyoming and UC-Santa Barbara have.

Thomas is coming off a big spring and summer for himself.  Thomas traveled this club season with the Compton Magic (CA), and was named the Most Valuable Player of the Junior Adidas Gauntlet in the spring.

Thomas is an electric young guard prospect with an advanced young ability to score the basketball and a nice shooting stroke.  He has an excellent handle of the basketball and a knack for slashing and scoring the basketball in the open floor.  He is a pure scorer and also a slick ball handler and defender that plays passing lanes.  Thomas has a very bright future ahead of him, and is another strong reason why the state of Arizona is absolutely loaded for the future.

I will continue to follow the recruitment and progress of Thomas closely, and continue to bring you updates as they continue to develop.