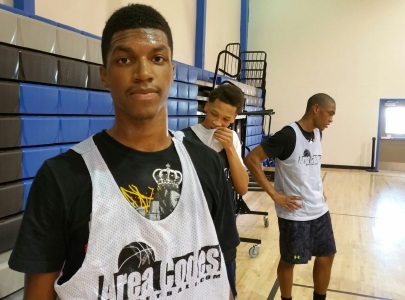 One of the top overall prospects in Arizona's 2016 class is still a very unheralded prospect with loads of college potential.  Fairfax High School's gifted 6-foot-5 senior wing Dominic Rhymes is a very nice looking prospect that has flown well below the recruiting radar, but is well deserving of some attention.

Rhymes is another top-rated prospect in the famous Rhymes family - a family that has produced some of the state's top high school players of all time.  This Rhymes is a very talented prospect with loads of potential for the future and very good length of body.  He is a very nice looking prospect that will only get significantly better over time.

Rhymes is coming off a good junior season where he averaged 13.2 points, 6.4 rebounds and 2.2 steals per/game last season.  He looks prepared to have a big senior season.

Rhymes seemed to disappear this club season, as he traveled with a talented Team Bibby 17U squad.  Rhymes did not see as much action as I would have hoped, when I saw the team play, so I left the summer evaluation period wanting to see more of him.  Recently, Rhymes participated in the Scholar Academic Showcase at South Mountain Junior College and impressed me with his potential as a college prospect.

Look for Rhymes to have a strong senior season, while doing it all for his high school program.  This versatile prospect will also make a nice jump in our next Player Rankings.