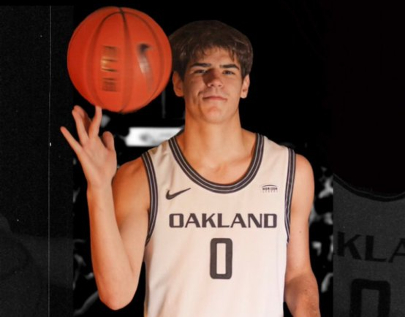 The PHH Prep basketball program has had a big week of offers and commitments for their players. One nice commitment for the program included sharp-shooting 6-foot-4 senior guard Dominic Capriotti, who has decided that he will sign this fall with Oakland University, after giving a verbal pledge this week to the program.

This verbal pledge was a nice one for Capriotti who previously gave verbally committed to Northern Colorado almost exactly a year ago as a rising junior. While it was thought that Capriotti would go to Northern Colorado, he recently decided to re-open his college recruitment and now has landed a new home for himself at a nice program in the Horizon League. Capriotti, regarded among the elite shooters in the West, will fit in nicely in the Oakland program that likes to spread the floor and shoot three-pointers. Capriotti is a pure shooter of the basketball with unique range and a quick release on his shot, which will suit him nicely in an Oakland uniform. He is a threat to score from almost anywhere on the floor, and is also a very tough, gritty performer that competes on both ends of the floor, and frustrates his opposition with his focus defensively.

As a sophomore, Capriotti decided to change high school programs - leaving Skyline High School for the PHH Prep program, where he is now finishing up his high school playing career. Capriotti and his father, former Skyline HS Head Coach James Capriotti, decided to move to the PHH Prep program last season. James Capriotti leads the PHH Prep National Team now for his second season, alongside Kirk Fauske and John Ortega. This year's team will be very talented once again, led by a majority of Arizona products and Division-I prospects.

Capriotti is a gym rat and is a specialist as s shooter - a player that every program needs to extend defenses and become more efficient offensively. Congratulations to Capriotti once again from our Arizona Preps' staff, and also the PHH Prep basketball program on another amazing commitment. Capriotti will now look to sign a national letter of intent with Oakland during the fall signing period, which begins on November 10th through the 17th.