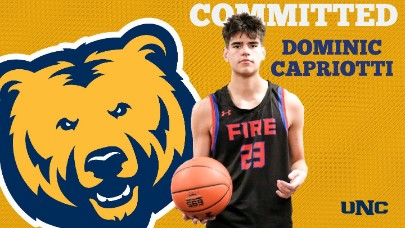 Arizona's 2022 Class of prospects is absolutely loaded with talent for college programs to take a hard look at. As a result, many college programs are already positioning themselves early with prospects in the class. PHHoenix Prep 6-foot-4 junior sharp-shooting guard Dominic Capriotti has raised eyebrows early in the recruiting process with his ability to shoot the basketball with unlimited range. This week, Capriotti decided to position himself with one of the college programs already pursuing him - giving a college pledge to a member of the Big Sky Conference.

This week, in very surprising fashion, Capriotti decided to end his college recruitment early, becoming the first member of Arizona's 2022 Class to fall off the recruiting board. After recently receiving an offer from Northern Colorado University, Capriotti decided to pull the trigger - verbally committing to the program, and new Head Coach Steve Smiley and his basketball staff. Smiley recently took over the Northern Colorado basketball program, after former Head Coach Jeff Lindner took the University of Wyoming job.

The Northern Colorado staff has definitely shown strong interest in recruiting the state of Arizona, as well as landing prospects that can shoot the basketball, and Capriotti is one of the best in the business at doing so. This young man, while only entering his junior season, fully established himself during his sophomore season at one of the best pure shooters of the basketball in the state, regardless of class. Capriotti had a strong sophomore campaign - averaging 13.6 points and helping lead Skyline to an impressive 27-3 record on the season, and a 6A State Semi-final finish.

Capriotti can stretch the defense from anywhere on the floor, with unlimited range and a very quick release on his shot. He is a threat to score from almost anywhere on the floor, which made his Skyline program so tough to defend last season. Capriotti is also a very tough, gritty performer that competes on both ends of the floor, and frustrates his opposition with his focus defensively.

Congratulations to the Capriotti family on this amazing accomplishment from our Arizona Preps' staff, as well as the PHH Prep basketball program.