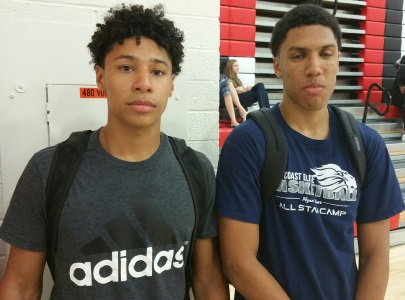 One unsigned 2016 prospect that has really caught my attention this high school season is Dobson High School's talented 6-foot, 165-pound senior guard Kendrick Williams (pictured left).   An unheralded guard prospect, Williams has led his Dobson team to a nice 15-5 overall record this season, and is soaring under the recruiting radar.  Every year there are numerous Arizona prospects that go well underrecruited and fly well below the recruiting radar.  This season, Williams is one of those prospects that is worthy of serious recruiting attention.

I first discovered Williams in our recent Arizona Preps Fall Showcase at Glendale Community College where he played very well and proved to be one of the top overall performers in the event.  This season, I have watched Williams multiple different times, and he has impressed me each time with his command presence on the floor.  Williams has excellent speed and quickness with a strong handle and a nice ability to run a team.  Williams is a very good shooter of the basketball with range, although shot selection can still be questionable at times.  He makes shots consistently and is a scoring threat at all times with the basketball in his hands.

His best asset is his ability to operate a team as a floor general.  Williams make players around him better as he looks to make plays for others, through his penetration and setting up teammates on the floor.  Williams is also a very good defender with excellent lateral quickness.  He has very good court anticipation on the floor - playing the passing lanes and stealing the ball or deflecting passes consistently.  Williams has the ability to decome a lock-down defender over time, a valuable asset for any college team.  He will just need to concentrate on this area of his game.

Williams is an excellent guard prospect for a smaller college program.  He will have the option of heading the junior college route after this season to improve his college recruitment, or he could play at a strong division-II program, if he gains attention from one.  He is well deserving of a division-II offer in the spring, and I believe he will get an opportunity.

Williams and his Dobson team are among the top shooting teams, and also among the highest scoring teams in the state.  They will have a good chance to upset some teams in this year's Division-I state playoffs, as a result of their high octane offensive style.  The right shooting performance and Dobson is capable of beating anyone in the state playoffs.  Throw in legendary Dobson head coach Rick McConnell and this team will be very dangerous down the stretch.

Anything that this Dobson team will do this season, will rely heavily on the performance of Kendrick Williams.