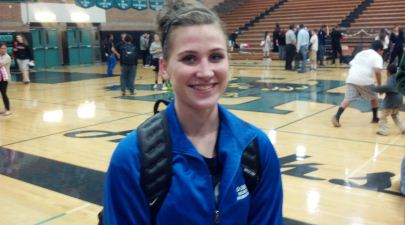 Dobson High School head coach Tyler Dumas and the Dobson girls basketball program have to be very excited as they have started off the 2013-2014 high school basketball season with a big, 8-0 start to the year.  With several big blowout victories early in the season already, and key victories over such talented teams as Mesa Mountain View, Mountain Pointe and Gilbert Highland, this year's group of Mustangs is on a tear and looking to hang a Division-I state championship banner in 2014.

Dobson (8-0) returns a loaded and experienced group this high school season, after only losing 4 seniors to graduation from last year's team - a team that finished with an impressive 22-8 overall record on the season.  While this year's team would lose such top returning players as Katherine Hamilton (University of San Diego) to graduation, the team has flourished as many of this year's returning players gained valuable experience on last year's team.

Last year's Dobson team would fall just short of reaching the Division-I state semi-finals - falling at the hands of a talented Highland High School team in the state quaterfinals.

This year's group is led by the play of 5-foot-8 senior guard Miyah Leith and 5-foot-7 senior guard Tori Lloyd (Northern Arizona signee) - two of my favorite guard prospects in the state.  Both guard prospects are very skilled and are able to keep the defense very honest with their ability to score the basketball off the dribble, and also shoot the basketball from the perimeter.

Lloyd does a little bit of everything for the Mustangs, actually leading the team in rebounding from the guard position on the floor thus far this season.  Lloyd is among the premier talents in the state, and signed a division-I scholarship this fall with Northern Arizona.  Leith is also very talented and is among the best sleeper guard prospects in Arizona's 2014 class.

The Mustangs are also getting very good support from a pair of juniors - 5-foot-6 junior PG Dyesha Stahley and also 6-foot junior post Monay Mariscal.  Both junior prospects are providing excellent production early in the season for head coach Tyler Dumas, and will only look to get better as the season progresses.

Coach Dumas plays many players each night and runs players in and out of the game, so this Dobson team is deep and eventually wears most teams out.

Look for this Dobson team to continue to roll this high school season, and stay in the hunt for the elusive Division-I state title.