Dobson Girls Hold On Against Mesa 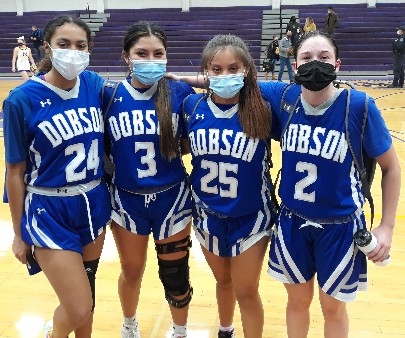 This shortened pandemic season has things heating up state-wide. The race for the top spot in the 6A East Valley Region is a dogfight between Dobson, Westwood and Mesa. Each team sports quality coaching and talented student-athletes.

Mesa impressed with a "Triple-Threat" of their own in 5-foot-4 JR Guard Mackenzie Shivers, 5-foot-4 SOPH Guard Ashiian Hunter and 5-foot-8 SR Wing Dei'Jonae Moore. Mesa played very up-tempo, pressing the entire game. However, the Lady Mustangs from Dobson held on to beat the Lady Jackrabbits, 46-43.

This game was very exciting, since both teams are well-coached and disciplined. Legendary Coach Henry Bribiescas continues the rich ladies basketball tradition at Dobson, and continues to develop talented players.

Coach Katie Fonseca has resurrected the Mesa Lady Jackrabbits after coaching at Blackburn College in Illinois. Both programs are riding momentum from last season, as both teams got to the first round.

The first half was exciting, since it was a back-and-forth game. Mesa looked to apply full-court pressure early. Mesa’s starting wing Dei’Jonae Moore wreaked havoc on the opposing guards, by pressuring Dobson’s guard core to make bad decisions. However, Coach Bribiescas adjusted his guard play, which resulted in guards Rachel Early, Jaden Leslie, and Ahdiayh Chee slowing the tempo down to set up their half-court offense. The result was better possessions and good shots.

Dobson really has a nice offense with a lot of ball movement. They displayed fundamentally sound guard play with excellent ball movement. Mesa showed a nice 1-2 punch of guards of their own in Mackenzie Shivers and Ashiian Hunter. At the end of the 1st half, Dobson led 23 to 19.

Mesa showed it’s athleticism, as they pressed the entire game. The momentum the Lady Jackrabbits built at the end of the 3rd sparked a run - cutting Dobson’s lead more and more, as the time ticked down.

Finally, the Lady Jackrabbits tied the game with 1:23 left in the game. It showed that the defensive pressure flustered the Lady Mustangs’ guards.

Coach Bribiescas adjusted by having his guards control the tempo, which was enough for them to take and hold on to a lead. The end result was Dobson downing Mesa, 46-43. I look forward to covering their next game on February 26th.

Notes: 5-6 Dobson Freshmen Guard Ahdiayh Chee - A very talented player with a high ceiling. I predict she could be a low to mid major prospect, if she continues to develop. She is confident, makes good decisions and shows a high basketball IQ. She has a good motor on both ends, can facilitate the offense, create offensive opportunities for herself or her teammates, has range and finishes well at the rim.

5-4 Mesa Sophomore Guard Ashian Hunter - A great talent who shows a knack for scoring and hitting clutch shots. She sees the floor well and has a great shot. College coaches take note.

5-4 Mesa Junior Guard Mackenzie Shivers - Another talented prospect who sees the floor well, possesses great decision-making. Nice slashing ability and seems to be the leader on the floor.

5-7 Dobson Sr. Guard Rachel Early - An elite scorer with nice inside, mid-range and perimeter abilities. She seems calm and can control the tempo of a game. A steal for any college program.

5-7 Dobson Sr. Guard Jaden Leslie - A great floor general who plays aggressive. She is tough inside and out on both offense and defense. A crafty defender who has a knack for creating turnovers. She has great finishing ability. Another prospect college coaches need to keep on their radar.

5-8 Mesa Sr. Wing Dei'Jonae Moore - An athletic defender who brings a high energy motor. Plays hard and is willing to guard anyone.

5-10 Dobson Jr. Forward Allira Martin - An athletic presence who is a blue collar worker. Has a great motor and cleans the glass on both ends of the floor. Solid ability to play the wing and inside.