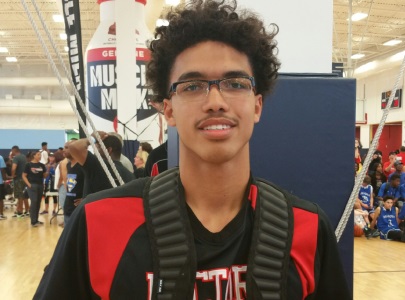 Over the weekend, our Arizona Preps' staff traveled to Las Vegas, Nevada to observe the action in this year's Pangos Sweet 16 exposure event.  Organized by top-rated West Coast scout Dinos Trigonis, the event was filled with many club programs from the West Coast.  Of all the Arizona prospects that we watched this weekend in action, Westview High School's talented 6-foot-3 sophomore guard D'Maurian Williams would emerge in a major way in the event.

Williams has been pegged as one of the elite prospects in Arizona's 2019 Class for some time in the state of Arizona, but while he had a very strong spring and summer for himself last year, and also had a strong sophomore season in the state as well, most college programs have yet to see Williams perform.  This weekend, Williams utilized the first viewing period to make some noise for himself.

Williams would lead his Arizona Factory 17U team to a strong semi-final finish in the top division of the event.  The Factory, coached by long-time club coach and ACBL league director Kenny Mullins, would fall in very narrow fashion to a talented Belmont Shorte (CA) team.  Former head coach of the historic Arizona Magic club program, Mullins is now leading a program known as the Factory, which is loaded with some lesser known talented prospects.  One of those prospects is D-Maurian Williams.

Williams would lead his team to a big finish in the event, as he went head-to-head with the Belmont Shore guards and outplayed them - showing off his strong physical frame and excellent toughness.  Williams physically punished his opposing guards in the event - getting into the lane and finishing strong at the basket.  Williams is an excellent young point guard prospect that loves to have the basketball in his hands and survey the floor, where he is able to make plays off the dribble almost at will.  His superior toughness and ability to absorb contact is very impressive, especially for such a young age.

Williams has a high basketball IQ, rarely seen in the state of Arizona by younger guard prospects.  His physical size and ability to run a team are glaring.  As a result, this young man has the potential to play at the highest level over time.

I will be keeping a close eye on Williams this club season, as he continues to make a name for himself with coaches, scouts and media.

Arizona Hoop Review Scouting Report: Williams is very impressive in his ability to play the game of basketball and make plays for himself and others.  Williams is an advanced prospect that is able to take the game into his own hands and come up big for his team.  Williams is a nice prospect that likes to have the basketball in his hands and make plays for himself and others.  A tremendous young prospect that should develop into a high-major division-I guard over time.  Williams is a pure-point guard prospect that has excellent size at 6-foot-3 and is still growing a great deal.  This young man has worked hard on his game at an early age, and it shows early as he is a very nice floor general with an ability to make plays off the dribble.  He has a strong handle of the basketball and is able to handle defensive pressure, while making players around him better - a valuable asset for someone his age.  There are very few players his age with his combination of size, strength and skill level.  Still a young prospect, Williams is gaining valuable experience on the aau/club circuit, and will continue to blossom as a player and develop into one of the state's elite level talents over time.

Evaluation Notes:  Also playing well in this weekend's event was Apollo High School's skilled and athletic 6-foot-5 sophomore wing Emmanuel Tabon.  Tabon is a nice talent with a nice overall skillset and serious upside as a player.  Possessing very good length of body and athleticism, combined with a serious shooting stroke, Tabon is a sure-fire college prospect for the future.  He is very thin physically but has a nice ability to slash and finish in the lane.  As he matures physically, and if he will continue to work hard, he should become one of the state's elite 2019 prospects.

Liberty High School's 6-foot-5 junior forward Quentin Guliford had a breakout performance in this weekend's event.  The athletic wing prospect has an excellent ability to finish plays at the rim, and can score with either hand in traffic.  He has excellent length on his rangy frame and plays much bigger than his size suggests.  Guliford is a serious sleeper prospect that will make a smaller college program very happy.  I will be keeping a very close eye on Guliford throughout the spring and summer, as he has definitely caught my attention with his play thus far this spring.