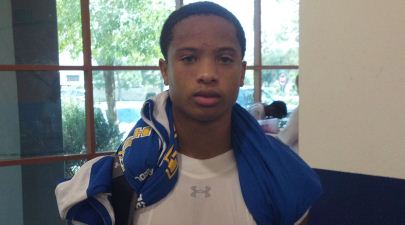 One player in the state that will look to definitely see a rise in our next release of Fall Player Rankings for Arizona's 2013 class is Mesa High School's 6-foot-2, 175-pound rising senior guard prospect DJ Henderson.  An athletically gifted guard that is capable of scoring in bunches, Henderson is one player to definitely watch this up-and-coming high school basketball season.

Henderson is one player in the state that has soared below the recruiting radar, as many college programs have not seen him play; but this young man is definitely worthy of serious recruiting attention.

Henderson is a left-handed and athletic combo-guard prospect that is capable of playing both guard positions, and likes to have the basketball in his hands.  He is at his best scoring the basketball from the scoring guard position, but can handle the point position as well when needed.

I caught my first glimpse of Henderson last fall in our 13th Annual Arizona Preps Fall Showcase.  In the event, Henderson impressed me with his ability to get to the basket and finish in traffic.  While he still needs to become more consistent in his shooting stroke from longer ranges on the floor, Henderson can get in the lane and finish with strong dribble drives and slashing moves to the hoop.  Henderson is also very good in the open floor, and pushes the basketball with vigor.  He is at his best slashing and making athletic plays.

Henderson will look to raise his numbers a great deal this season, and should develop into one of the top scorers in the state this season - a fact that will benefit him well among college coaches in pursuit of an athletic guard prospect this spring.

It is still unclear as to which college programs are serious about Henderson at this point, but look for him to become one of the top guard prospects during the late signing period.

Keep an eye out for Henderson this high school season, as he looks to make a case amongst the state's best.