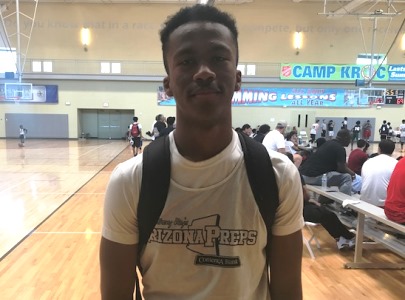 One Arizona prospect that is looking to have a big summer for himself is AZ Compass Prep's skilled 6-foot-6, 200-pound junior wing DJ Hawkins.  Hawkins has developed  over the past year as a player, while playing against top-rated competition in the prep ranks.  He is now focused on having a strong summer performance for himself to boost his overall college recruitment.

Hawkins is one of the better but still lesser known prospects in Arizona's 2019 class.  After leaving Gilbert High School after his sophomore season and transferring to AZ Compass Prep, Hawkins picked up his junior season and played for head coach Ray Weathers and his staff.  Hawkins joined a very talented team at AZ Compass Prep, which was led by the play of University of Utah commit Both Gach and high-scoring guard Dwayne Walker from Milwaukee, WI.

With numerous transfers on the team and also loads of talent and competition, Hawkins looked to blaze a trail for himself through hard work, while developing as young man - spiritually, mentally and physically.

In such a situation, DJ developed a great deal as a player, as he is now a skilled wing prospect that has a very good feel and understanding for the game.  Capable of playing as a guard or as a forward, Hawkins is a very good ball handler and passer with a good perimeter shooting stroke with range on his shot.  He is a good mid-range player that is still developing physically, but he is able to make plays off the dribble for himself and get to the basket, where he is a solid finisher.  He is still growing physically a great deal, and his continued maturity will benefit him very nicely over time, as he looks to become even quicker and more explosive.  Hawkins worked hard in the weight room this season, and also worked on his advanced skillset to become a more complete and well-rounded performer.

Hawkins has excellent work ethic, one of his best attributes as a player, and is willing to put the time in on and off the court, which will benefit him nicely over time and in the future.  He is also a fine young man and a student that will make any coach happy.

Hawkins will now focus on having a big July performance for himself, while playing as a comgo guard - playing as a point guard and as a shooting guard prospect.  Hawkins is playing for the Arizona IPlay Elite club program, and had a good spring performance for himself, although he is still soaring below the recruiting radar.  This summer should prove very big for Hawkins, since there are many college programs with numerous scholarship opportunities for the class.

Hawkins will have his first major test in this summer's Southwest All-American Camp, against loads of serious competition.  He had a very good showing in the first annual camp last summer, so he should fair even better this summer in front of the many coaches and scouts in attendance.

I will continue to follow Hawkin's progress as a college prospect this July, and bring you any recruiting updates on him this summer, as his college recruitment begins to develop and unfold.