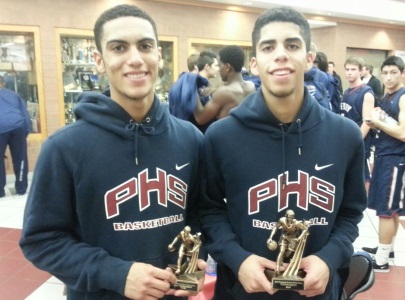 If you love high school basketball in the state of Arizona then this week has been one of excitement for you, as basketball has filled the air in every division, every class and every section cross the state - leading us toward the semi-finals and, ultimately, the state championship this weekend.  Thursday was a full day of basketball action on the campus of Arizona State University at the Wells Fargo Arena, as the AIA (Arizona Interscholastic Association) organized numerous exciting match-ups for basketball fans to get excited about.

One of the most exciting match-ups two of my favorites all season in the Division-I Class face off, as top-rated Sunnyslope High School and Perry HS took the floor against one another.  Both teams have had terrific seasons this year and both teams featured top-rated talent.  While not being filled with talented prospects on both teams, Sunnyslope's 6-foot-3 junior guard Sammy Thompkins and 6-foot-10 senior post Michael Humphrey (Stanford signee), and Perry's backcourt of senior guard Jordan Howard and stellar freshman guard Markus Howard have both been as good as any team duo in the state this season.

After falling behind in the first quarter to Sunnyslope, 17-12, Perry would come from behind Thursday evening, and behind the strong scoring effort from Markus Howard, who would finish with a game-high 25 points.  The effort from the younger Howard would help Perry to come from behind late - outscoring Sunnyslope 20 to 13 in the final period to help Perry to a big 54-49 quarterfinal playoff victory - ending the hopes of the Vikings.  The defensive effort of Perry would also hold Humphrey, one of the state's most dominant players, to a mere 14 points, while Sammy Thompkins would get in foul trouble and also suffer an injury during the game.

Perry will now move on to face the two-time defending state champions, Corona Del Sol, in another war - their third match-up of the season.  Perry has lost twice to Corona in the last month, but both games were close - especially a recent narrow one-point loss to Corona in the sectional finals.

In the next match-up of the day, Pinnacle (22-9) would get a big win over a talented and big Gilbert team, 69-57, behind another big performance from 6-foot-5 senior guard Dorian Pickens (Stanford signee).  With the Stanford coaching staff in attendance and looking on, Pickens would put on a show - en route to a game-high 36 point performance.  Pickens would score 13 points in the third period, including a late three-pointer, which would help his team build a big lead in the quarter.  Pinnacle would never look back.

Last season, Pickens would come up big for his Pinnacle team, only to fall short of winning it all, as Corona would come from behind to win the title in the final quarter.  Pickens looks focused this season, his final go-around, to lead his team back to the final game, but he will have a much tougher time this season to defeat a Corona team that is much better than last season.

Pinnacle will face Dobson HS (24-7) in the semi-finals for an opportunity to advance to the state championship game.  Dobson recently defeated Pinnacle in the sectional finals, so this new match-up could not come at a better time for both teams, with Dobson playing their best basketball of the season.  Dobson would blow past Hamilton HS on Thursday evening, 58-38, led by a game-high 23 points from 6-foot-5 senior guard/forward Ryan Richardson (Weber State signee).

The duo of Richardson and 6-foot-4 senior guard Kodi Justice (Arizona State signee) has ben terrific since the holiday break, as Dobson has compiled a 16-1 record since the start to January.  Justice and Richardson are bigger guards that can spread the floor with their ability to make shots, and both guard prospects create match-up problems for opposing teams.  It will make for an exciting semi-final match-up on Friday evening.

And, of course, everything comes back to two-time defending state champion Corona Del Sol.  The Aztecs have been almost flawless this high school season - ranking among the top 10 teams in the country this season, and going undefeated within the state of Arizona - their only loss on the season to nationally ranked Findlay Prep (NV).

Corona (31-1) would defeat Mesa Mountain View 71-54, after building a quick and early 34-18 first half lead.   Corona would not look back in the game, and would cruise to another well-balanced outburst against the Toros.

While 6-foot-3 senior guard Casey Benson (University of Oregon signee), has not played his best as of late on the offensive end, he has not needed to, as the Aztecs are absolutely loaded with physical talent and teamwork, which has presented serious problems all season long for hopeful opposition.

All season long, this year's state title has been Corona's to lose, and no one in the state has proven that they can dethrone this talented and well-coached group.  As I have said all season, looks like a third consecutive state title for the Aztecs on Saturday.