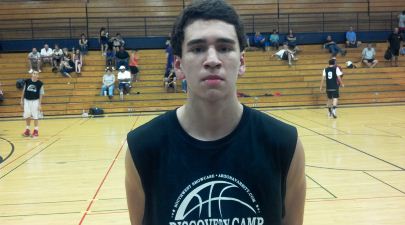 There were 44 boys at Ron Coleman’s Southwest Showcase Discovery Camp at Deer Valley High School on September 22nd.  The parents were informed about recruiting and academics to help out their son's for the future.

Here are the top 20 boys at the event based on how well they performed ...

Joey Cipolletti PG 5’11” Horizon HS -  Joey is your classic scoring PG.  He can make some nice passes every now and then, as he made a beautiful left-hand pass before the half was over, but normally he’s looking to score.  He almost reminds me of Kodi Justice’s game where he can facilitate, but is 1 of the best shooters in his class.  I think that’s where Joey is headed.  He is an elite shooter with amazing range.  He can step back off of a hesitation dribble and drill it from deep.  He is not only a spot-up shooter, but he can take the ball to the hole - usually with his right hand and find some creases to the cup to score.  His body is sturdy enough to bang a tad inside and grab some boards, and then put up a soft floater for 2.  He also has a good mid-range shot, as he is just one of those kids who can just shoot from any spot on the court.  He isn’t the fastest kid in the gym, as he might struggle with speed PG’s who get in his face and force him to drive instead of shoot.  Joey will also have to improve on his left hand and his overall feel for the PG position to continue to improve.  Joey is a low major prospect currently.

Cameron Sheridan  PG  5’10”  Horizon HS - Cameron is another Horizon PG with a different game.  He is a pass-first PG with a solid left hand shot.  He is very good at making his left hand lay-ups, and can shoot it from mid-range or the deep 3-point shot. When he gets his feet set and finds a rhythm, he can drain 3-4 shots in a row.  Even though he’s not a burner, he can get into the lane fairly easily, and choose to pass it for an assist or lay it in himself.  He will have to work on his right hand and find a floater when he attacks the rim.  Also, he can bang down low with his solid frame and it’s not uncommon for him to grab a rebound and take it coast-to-coast.  He probably was the best rebounder for a PG at the event.  He will have to get in more elite shape, which will increase his speed and overall stamina.  His special passing makes him a player to watch for the future.  Over the next 4 years, it will be interesting to see his progression.  This elite passer is a low major to smaller school prospect.

Andrew Ekmark  PG  5’10”  Phoenix Country Day HS - Andrew is a great shooter with solid handles and extremely confident. He can score on all 3 levels with the floater or lay-up, great mid-range jumper and the deep 3-point shot.  His 3-point shot is 1 of the best, as he made at least 4 in only 2 games.  He also has solid vision to throw some nice passes for an assist.  He takes the ball at you very hard to set you up for a 3-point shot.  His release is quick to get it off easily.  He will need to refine his game with a stronger left hand and play better defensively.  I love how he expects the players around him to play up to his level, as he is demanding top play from everyone including himself.  This confident PG is a low major to smaller school prospect.

Nick Mains  SF  6’2”  Pinnacle HS -  Nick is a finesse player with a real nice stroke and has a high IQ.  He knows when to cut for a lay-up, as he made many pick-and-roll plays in the 2 games.  He also can shoot it from deep and mid-range.  His handles are solid, but they could get tighter - and he shows high effort on defense.  He blocked a few shots down low and grabbed some boards, but doesn’t seem to like the pounding inside.  He does have a deceptively long stride with his first step, and gets by his defenders for lay-ups.  He will need to hit the weight room a little and clean up his overall handles.  Nick is a low major to smaller school prospect.

Abraham Wilson  CG  5’9”  Liberty HS - Abraham is a very good passer and is a great 3-point shooter.  He also is a glue guy on any team, as he does a little of everything.  He plays solid defense on every possession and dives for the loose balls and grabs rebounds, in and out of his area.  He is a good team player and he will do what is necessary on every play to help his team out. He will just out-hustle the player guarding him.  His best skill though is his shot.  He can hit 3’s from everywhere.  He also has a solid mid-range shot to go along with his deep shot.  He will have to work on his left hand and he can add a floater too.  This true hard worker is a low major to smaller school prospect.

Cole Trout  PG  5’1”  Liberty HS - Cole is another pure PG with amazing handles and has a nice shot.  He has his head up the whole game trying to find his teammates to make a pass.  He made some of the better passes on the day.  He has range out to the 3-point stripe with his shot, but it seems he may prefer the mid-range game.  It is very hard to steal the ball from him, as he is a very smooth ball handler.  He will need to develop more of a left hand and find a floater to make shots in the paint, since he is only 5-1.  He is actually very athletic for his height and it seems he plays bigger then his height suggests.  This smooth PG is a division-II or III prospect.

Darion Spottsville  SF  6’0”  Shea MS - Darion is your rare point-forward type.  He handles the ball well for a forward and is quick enough to go by his man to create a shot for others.  He had 10 assists on the day, which was the highest for any grade. He has a nice mid-range jumper and can make any lay-up, but is usually just trying to pass.  He also is a very good rebounder, due to his solid length and timing.  He can make himself long and knock some balls loose to make some steals and all-around hustle plays.  He will have to extend his range from the 3-point area, and use his left hand a little better.  He has immense potential with his blend of size, length and IQ.  This Boris Diaw clone is a low to mid major prospect.

Colten Kresl  PG  5’7”  MS - Colten is the best PG I have seen in his class.  He is small, but it really doesn’t matter as he uses all his tools the right way.  The first thing you notice is that his handles are extremely tight, and he has a quick crossover to go with it.  Then you see his court vision - had 2 no-look passes, and it reminds you of a young Casey Benson.  He also has a beautiful stroke from behind the arc.  He hit a few mid-range shots and mainly shoots the 3-point shot, but he knows the pick-and-roll game and can make every pass available to him.  He will have to work on his defense, and adding a floater will help him inside the paint.  This elite passer is a low major prospect.

Jordan Pace  SG  5’10”  MS - Jordan has a solid all-around game.  He has nice, solid length and is very smooth on the court. He never seems to rush anything he is doing.  He can score on all 3 levels with the mid-range, the 3-point shot and the drive.  His best skill is his pull-up mid-range shot.  He also has a solid floater and is good passer.  He needs some work on his defense, rebounding and left hand.  His basic fundamentals are very good.  Any coach in high school will be happy to have him.  Jordan projects as a low major prospect.

Mason Stark  PG  5’4”  MS- Mason is the best shooter in the gym regardless of class.  He proved it by winning the 3-point contest that all the kids were a part of.  He hit about 7 3’s in 45 seconds four different times, which was so impressive.  His game is not just shooting, as he has great court vision.  He also has good control of the ball, as it is very hard to steal from him. He has all the offensive tools you might want from a PG, but he will struggle on defense.  He is extremely small, thin and doesn’t have much strength to contain another PG at the next level.  Mason is a smaller school prospect.