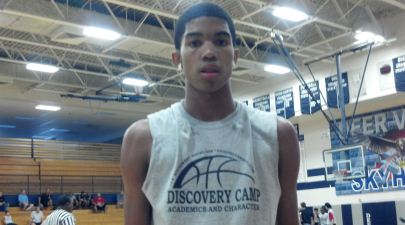 There were 44 boys at Ron Coleman’s Southwest Showcase Discovery Camp at Deer Valley High School on September 22nd.  The parents were informed about recruiting and academics to help out their sons for the future.

Here are the top 20 boys at the event based on how well they performed.

Tyrell Henderson  SG  6’2”  Corona del Sol HS - Tyrell has the whole package on offense and defense, and also has a great frame to go with it.  To start off, we will talk about his offensive game.  He can score on all 3 levels and he can do it in bunches. He shoots a 3-point shot if your hand is down, and next possession you go at him, since your worried, he will make another deep shot - and then he blows by you with his special first step like you need to stop playing basketball.  Finally, his best skill is the mid-range shot.  He can be going fast at you and then rise up and fire.  He can do it on the break and if he sees a big is waiting for him, he will use this mid-range magic flawlessly.  His defense is real good too.  He starts off locking you up with his 6-7 wingspan, and then if you come near the paint, he will block or alter your shot - and he’s just a SG helping the post players.  He also is an excellent rebounder for his position. This talented player is a mid to high major prospect.

Cameron Satterwhite  SG  6’1”  Gilbert Christian HS - Cameron also passes the eye test like Tyrell.  He actually resembles Paul Watson with his long, lean body that looks like it will never stop.  His game is very smooth, as it looks like he’s gliding around on the court with his speed and handles.  He can cross anyone in the gym if he has to.  He usually makes an explosive first step and blows by his defender with a lay-up, finger roll or he steps back and hits a deep 3-point shot.  He will need to add a mid-range shot to his game to continue improving, but it usually just doesn’t matter, as he just is too good to contain.  The scary thing is Cameron is actually better on defense right now.  He steals any ball near him with his speed, timing and length.  He blocks shots off the backboard to keep it in play, and if you do happen to go by him, he will recover and block your shot from behind.  He also grabs rebounds from everywhere and gets some he really shouldn’t - due to his incredible length.  This defensive dynamo is a mid to high major prospect.

N’Keal Harry  SF  6’2”  Marcos De Niza HS - He was probably the strongest kid at the event with his chiseled body and amazing frame to play football, which later I found out he does.  But don’t let the body fool you - thinking that he will hang in the middle and not move around well.  He is very fluid with amazing handles and a pure shot from anywhere.  In game 2 of the event, he got in rhythm and started hitting from everywhere.  I thought he would never miss again.  He made 6 shots in a row with mostly mid-range shots mixed in with some 3-point bombs.  He also is an underrated passer and uses his left hand very well.  A funny thing that impressed me a lot was in game 1, where there were only 2 minutes left and kids had heavy legs, but N’Keal kept pushing through off of sheer will to keep performing on a high level - until the game was over.  He will never stop working for your team and plays with a high motor.  N’Keal is a low to mid major prospect.

Frankie Trujillo  PF  6’4”  Cienega HS - Frankie is a man down low with a solid frame to bang and has great strength.  He collects the ball in the post, then feels his man and spins off of him to his right shoulder to get to the middle, so he can attempt his left hand lay-up.  He basically uses the same move over and over again, but since he is so strong, he gets it done.  His handles are also solid for a big man, as he can dribble by his man and make his lay-ups.  He will have to develop a better right hand and get a more consistent outside shot to further his game.  He is an excellent rebounder and made a few tip-ins in traffic to keep the ball alive or score the bucket.  This strong kid is a low to mid major prospect.

Brock(Bo) Brunkhorst  SG  6’2” Brophy Prep HS - Bo, as they call him, has a good all around game.  His IQ is extremely high, as he helps his teammates out on the sideline - explaining how to defend the tougher kids.  His game is so balanced that on every possession you really don’t know what to expect from him.  He starts in the triple-threat position to survey the court and then goes to work.  He could hit you from deep 3-point range with his beautiful stroke, and then blow by you and finish with the left or right hand.  He also is an amazing passer, as he hit kids in stride to the basket on the break and sometimes threw full-court passes perfectly.  He also is deceptively long, as he is a good rebounder and has real solid defense due to his length.  He was one of the most productive players at the event in every phase of the game. He is a low to mid major prospect.

Jacob Inclan  SG/SF  6’1”  Sunnyside HS - Jacob is a hard-nosed kid who has no fear.  He takes the ball to the hole almost at will.  He shoots a little too much, but he makes so many shots you don’t really care.  He’s not overly explosive or super powerful, but very efficient.  He can handle the ball well and has a good enough frame to bounce off of players, and is shifty enough to go by you.  He can hit 3-point shots, but prefers the mid-range jumper.  He is a solid rebounder and tries hard on defense.  Moving forward, he will have to use his teammates a little more and a use of a better left hand will help him.  He is a low major prospect.

Jake Rueter  PG  6’0”  Seton Catholic Prep HS - Jake was another player solid in all phases of the game.  He has great size for his position and could work you with his scoring or passing.  He has a feathery stroke out to 3-point range.  He has a nice mid-range game and is very fast, where he can blow by you with his right hand.  He also keeps his head up, where he can drive and kick it out to a shooter.  He will need to improve his left hand to keep improving his game, and would help to add a floater too, but he’s so fast that he gets by you most of the time.  His defense on the PG’s is solid due to his size. (He was the tallest PG at the event.)  His game is very mature for a freshman.  This all around PG is a low major prospect.

Kenneth Arrick II  PG  5’9”  Scottsdale Christian Academy - He is the purest PG you will see that has a solid 3-point shot with an amazing IQ.  Kenneth is the smartest player on the court regardless of position.  He gets every aspect of the sport of basketball.  He knows where everyone should be on the court and, most importantly, how to get the ball to his teammates.  He won’t wow you with his speed or jump out of the gym, but if you need a pass in traffic with your right or left hand, he is your man.  He also is extremely confident in his ability and produces at a high level.  He finishes off all his lay-ups with either hand, as it appears he is ambidextrous.  He also plays good fundamental defense, which you would expect.  This court-wizard is a low major prospect.

Malique Washington  PG  5’10”  McClintock HS - Malique is faster than fast.  He was easily the fastest player at the event. He blows by his defender for a left hand lay-up, or gets fouled on almost every possession.  He made 2 mid-range shots, but clearly he struggles with this part of his game.  He will have to continue working on his shot from all areas outside the paint.  He also is a very good defender, due to his speed and natural quickness.  He has solid passes, but also needs some refinement at this too.  He will need some help with his right hand, but it usually doesn’t matter since he is blazing fast with his left.  This speed-demon is a low major prospect.

P.J. Trujillo  PG  5’9”  Tucson High - P.J. is an elite passer and a solid scorer.  He is constantly putting pressure on the defense with his smooth passes anywhere on the court.  He will pass some full court passes, if it’s available and also anytime in transition or in the half court set.  He had around 8 assists in 2 games, which is an outstanding number for a showcase event.  He is just unselfish to a fault, but, when a score was needed to be made, he cashed in.  He hit a few mid-range shots, 1 3-point shot and made some lay-ups - but only if he realized he was the only play to be made.  His eyes are always open and even when you think he has a lay-up, he will pass for someone else to get theirs.  He will have to become more consistent with his 3-point shot moving forward to go to the next level.  He also has a positive attitude with his teammates.  P.J. is a low major prospect.