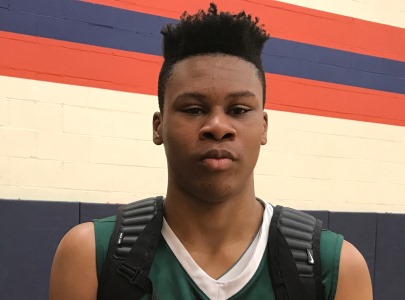 One of the elite prospects in Arizona's 2019 class of prospects is Hillcrest Prep Academy 6-foot-8 sophomore forward Dischon Thomas.  Thomas has developed nicely over the past year, and this spring he emerged nicely on the 16U EYBL Circuit.

Thomas is coming off winning a national championship with Hillcrest Prep Academy this high school season, and, as a result, he has developed nicelyamidst top-rated national competition, gaining valuable confidence as a player.

This spring, Thomas would become a top-rated prospect for the 2019 class, after playing very strong for the Las Vegas Prospects (NV), a heavily sponsored Nike program based out of Nevada.  Thomas led a very talented 16U team for the organization in scoring and rebounding, and helped the team to win tournament titles in the first (3) tournaments they played in this spring.

Thomas currently has offers from Cal State Northridge and San Francisco, and is receiving very serious recruiting interest from West Virginia, UNLV and Northern Arizona, with many more schools looking to get involved very soon.

After spending his freshman season at Cesar Chavez High School, Thomas spent last high school season at Hillcrest Prep Academy, where he is now a part of the 2019 classs after reclassifying and becoming a sophomore.

Thomas moved to the state of Arizona from North Carolina just two years ago and immediately became one of the top young prospects in the state.

Thomas is a superb, versatile talent with a very bright future ahead of him.  Thomas still has a lot of growth ahead of himself and should develop very nicely over time.  Look for Thomas to become a nice recruiting target among Arizona's 2019 class over the next year.

I will continue to follow his college recruitment closely and bring you any updates as they continue to develop.

Arizona Hoop Review Scouting Report:  Thomas is a superb young talent with a very bright future ahead of him.  A long and lengthy forward prospect with loads of talent for the future, and with excellent upside as a player.  Thomas is a skilled combo-forward with a solid perimeter shooting stroke with range, and an ability to score inside and out.  He has a good length of body and a nice wingspan and is still growing a great deal, which will help him a great deal over time in his ability to develop into a serious division-I prospect.  Thomas has a high basketball IQ and knows how to play the post position, while also being able to step outside and make perimeter shots.  He always seems to take good shots within the offense.  An active rebounder and shotblocker also, Thomas utilizes his length to make plays - an excellent offensive rebounder.  Thomas' wingspan also makes him a good shotblocker.  He also has good timing as a shotblocker and changes shots of players around the paint.  He should really improve in this area over time.  He is a strong rebounder, especially on the offensive end where he is able to effectively rebound and get put-backs for his team.  He runs the floor very well and finishes strong in transition at the rim.  Has a huge upside.  An excellent prospect for the future.