Devin White Among Scoring Leaders In The ACCAC 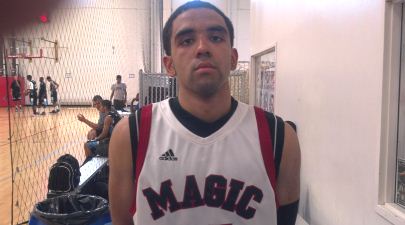 Marcos De Niza HS 6-foot-3 senior guard Devin White is among the state's most consistent performers in the 2013 class, and is looking to make his college decision this month.
Share
Facebook Twitter LinkedIn WhatsApp Pinterest Email

While Tohono O'odham Community College (5-14, 2-9) has struggled this season in the ACCAC to win ball games, 6-foot-4 sophomore guard Devin White has flourished in helping his team compete each night.  The hard-working sophomore guard is a bright spot for head coach Matt Vargas - ranking among the scoring leaders in the ACCAC Conference.

This season, White has averaged 17.7 points per/game on the season - ranking second among scoring leaders in the conference.  White also is averaging 4.6 rebounds per/game from the guard position.  White is shooting 41% from the field and 36% from the three-point line on the season.

White is a graduate of Marcos De Niza High School, where he was one of the state's top prospects in Arizona's 2013 class.  While an unheralded prospect among the top players in the class, White has always soared underneath the recruiting radar.  He would attend Mesa JC as a freshman, but would red-shirt his freshman season, before playing for Matt Vargas the last two seasons.

White is a nice pick up for a smaller college program looking for a gifted and skilled athlete with excellent work ethic.  He has an excellent attitude as a player and loves the game of basketball, which he has played at a high level all of his life.  White is a versatile prospect - capable of playing multiple positions on the floor.  He can play both guard positions, but is at his best from the 2/3 positions on the floor, where is able to make plays for hismelf and others.

White is currently receiving interest from numerous different smaller division-I programs, but looks to be hearing the most attention from division-II and NAIA programs currently.  The right fit will be very important in White's future decision on a college program, as he is at his best in an uptempo style of play.

Look for White to receive much more college recruitment as the junior college season continues to unfold in the spring.  White as really worked hard for himself the past three years, and is worthy of serious college recruiting attention.  He is an excellent young man and a great addition to any college program - an excellent student-athlete that will make a college program proud, on and off the floor.

Arizona Hoop Review Scouting Report:  A combo-guard prospect and a left hander, White is an athletic guard that has a knack for scoring the basketball.  He is always around the basketball and is a very good slasher and open court player.  He is also a very good finisher and scores well in traffic.  A good ball handler and passer that looks to push the ball up the floor to the open man. White is a good shooter of the basketball with range, but is at his best from mid-range where he likes to score off the dribble.  White is very active, making him a very good rebounder on both ends of the floor.  He plays with very good aggression and rebounds outside of his area, which he likes to do to start his team's fastbreak.  White is also a very good defender, and is not afraid to guard the opposing team's best player - which he can be found doing quite often.  He has very good lateral quickness and enjoys playing defense - a nice attribute.  A solid college prospect in many facets.