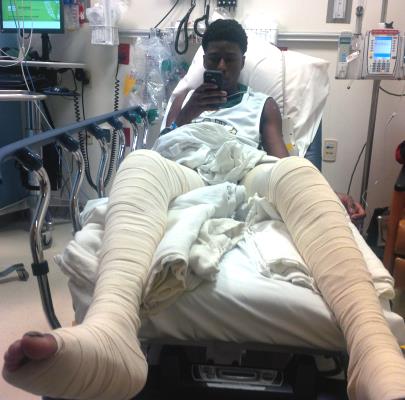 This week, Basha High School's gifted and athletic 6-foot-10 junior post Devin Kirby suffered a horrific injury during the McClintock Holiday Shootout basketball tournament on the campus of McClintock High School.  The injury came in the championship game of the event, as his team faced rival, Perry HS.

Just before the end to the first quarter and with 1 minute on the clock, Kirby would fall to the floor after attempting to make an offensive play.  Kirby would lie on the floor in absolute and sheer pain – screaming as a result of the injury.  Kirby would eventually receive assistance from a group of paramedics that would indicate that he may have broken both of his legs.

Basha players and many friends and family would visit Kirby at the hospital this week, bringing him the McClintock tournament's championship trophy, which now sits in his hospital room.

While everyone else was celebrating New Year's this week, Kirby would have surgery on both legs.  The prognosis determined that Kirby had suffered two open reduction internal fixation bilateral tibia tubercle fractions.  In layman terminology, two broken legs with the bone just below the knee cap fractured on both legs.  Kirby would get two pins (screws) in each leg.  While he will not be able to put any weight on either leg for atleast 6 weeks, and will be wheel chair bound during that time frame, Kirby is expected to have a full and complete recovery over time.

"I am so proud of him," said Kirby's mother Miki Kirby.  "He has improved big time just in the last day."

Miki went on to say, "It is really hard to be tough right now.  With no father in his life, I have always had to be the tough one for my kids, but right now it is really hard."

Devin Kirby is a wonderful young man and is taking this situation really well - as well as he can right now.  Kirby's spirit is really high and he is excited about the future for himself.  This young man deserves the world and I am extremely confident that he will be back and better than ever over time.  For now, he must rest and recover but his confidence himself and desire to have a complete recovery are glaring.  The road ahead will be long, but rewarding over time for him.

Notes:  Perry High School star guard, 5-foot-11 sophomore Markus Howard would also suffer an injury in the championship game.  While looking to get his team back within reach of Basha late, and while dribbling up the floor and looking to score, Howard would suffer a serious injury of his own.  Howard would fall to the ground after being fouled, and then bang his head on the bleachers.  The injury would cause more paramedics to arrive and transport Howard outside of the gym.  Howard would suffer a concussion on the fall

According to sources close to the Perry team, Howard is in recovery currently, and head coach Joe Babinski has decided to take his time in bringing Howard back.  Howard will be out atleast another week.  It will be very interesting to see if Howard will return for next week's exciting match-up again with rival Basha HS.  Last year's regular season match-up with Basha was a packed house, and more than 300 fans were actually turned away from entering the gymnasium.