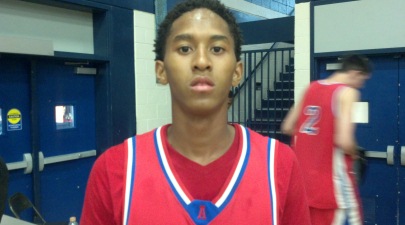 Kellis High School's 6-foot-3 skilled senior guard Desmond Ross had a huge senior season for himself - proving that he is among the elite guard prospects in the state. Ross signed today with a top-rated program in the Big West Conference.
Share
Facebook Twitter LinkedIn WhatsApp Pinterest Email

After a stellar senior season of high school basketball, Kellis High School’s 6-foot-3 senior combo-guard prospect Desmond Ross has seen his college recruitment come to a close, and in a big way, as the gifted guard prospect has signed a division-I scholarship with a school in the Big West Conference.

Today, Ross signed a national letter of intent (NLOI) with Long Beach State and head coach Dan Monson and his basketball staff.  According to his older brother Rory Ross (a former football player for Oregon State), Desmond took an official recruiting visit to the strong mid-major basketball program this weekend - giving a verbal commitment to the school before signing his NLOI today.

Ross really developed throughout his high school career and absolutely blew up in his final senior campaign.

This season, while being relied on heavily to carry his team to victories, Ross stepped up in a tremendous way – raising his overall numbers significantly and leading his team to a 19-9 record before falling to Agua Fria HS in the state playoffs.  Ross averaged big numbers, as he put up 25.1 points, 7.7 rebounds and 3.1 steals per/game – a tremendous improvement from his numbers as a junior.

Ross started off the 2012-2013 high school basketball season with a stellar performance in last year’s Arizona Preps Fall Showcase, where he sizzled for the college scouts in attendance.  Ross’ performance in the event raised many eyebrows of the national, regional and local scouts in attendance and proved that he is worthy of consideration among the elite prospects in Arizona’s 2013 class.

Congratulations to Ross and his wonderful mother on this amazing accomplishment.

Arizona Hoop Review Scouting Report:  Ross is a true combo-guard prospect with excellent size for the point guard position, and also has a nice ability to score the basketball from the off-guard spot on the floor – something he proved a great deal this high school season.  Ross has a slick handle of the basketball and very good quickness off the dribble – allowing him to make plays for himself or others.  He is an excellent slasher and has very good body control, which allows him to finish plays over bigger defenders in traffic and slice to the basket between defenders where he is a very good finisher.  He is a very good shooter with range on his shot, and is capable of scor9ing off the dribble or from the standstill position on the wing, making him difficult to defend for many opposing guards.  Ross is also an unselfish player that enjoys making the pass to the open man on the floor.  While he was asked to score at a high rate this high school season, he also proved last spring and summer while playing for his club program, the Arizona Stars, that he was very capable of playing in a supporting role with other talented scorers.  A selfless teammate that enjoys winning and loves the game.  Ross’ best attribute for the next level is his ability to defend opposing guards, as he has very good length of body and quick hands.  He possesses very good lateral quickness and good foot speed for the guard position, and his length also allows him to be a very good rebounder on both ends of the floor.  Adding more size to his physical frame in the future will help him a great deal in his ability to guard stronger, bigger guards.  As he matures physically and gets stronger, Ross will maximize his potential as a player.