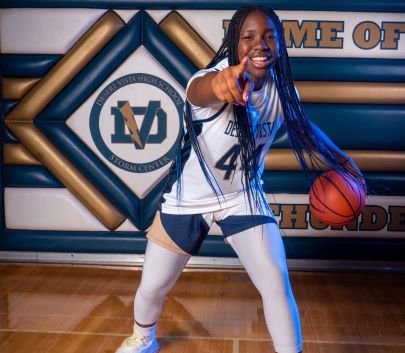 Desert Vista is a favorite to reach the Open Division State Championship Game. Their team is loaded with talent from top to bottom. One of their key pieces to success is junior guard Shay Ijiwoye. Ijiwoye played on Arizona Elite Prep last season, however their program was shut down. The result of their program being shut down was numerous high school programs attaining some of Arizona’s best girls basketball prospects.

Ijiwoye has numerous Division-I offers, and it is no surprise, as she is one of the top prospects in the 2024 class. Some of her offers include Clemson, Mississippi State, Oklahoma, NC State, Michigan, Illinois, Princeton, Villanova, Utah, Rice, Miami Vanderbilt and USC.

She will be taking an official visit to the University of Michigan on the 13th of January, which is no surprise, as numerous high major suitors are doing all they can to earn the commitment of one of the country's top available guard prospects.

Currently, Ijiwoye is averaging 12.8 points, 4 rebounds, 1.5 assists and 3.4 steals per game. Her most impressive stat is holding a 90% field goal percentage, which makes her a very efficient shooter.

Ijiwoye has a tight handle and knows how to break down her defender to finish at the rim. She is a three-level scorer who uses her crafty skill-set to impose her will offensively. Ijiwoye is an elite defender. Some people may overlook her ability to defend at a high level to create offensive opportunities.

Ijiwoye’s recruiting is continuing to storm upward, as many high major suitors are wanting to win the Shay Sweepstakes of landing a commitment from her. I anticipate more offers to flood in during the Spring and Summer, as she plans to play AAU with Jason Kidd Select on the Nike EYBL Circuit. I am excited to see how her team competes the 2nd half of the season.