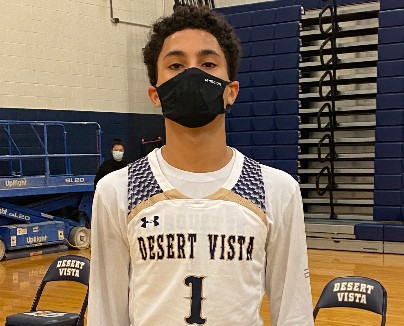 In a highly anticipated Section 6 match-up, the Queen Creek Bulldogs (0-3) traveled to Phoenix to take on the Desert Vista Thunder (2-1).

Desert Vista, the returning state champs, looked a lot different without their former coach Gino Crump, and a ton of roster turnover. The Thunder lost former star center Oso Igodaro to grduation, and he is now playing on the college stage at Marquette, 2021 PF John Solomon who transferred out of state, Dasean Lecque who transferred to Hillcrest Prep and 2021 Guard Marcus Wady who transferred to Bella Vista Prep. Despite all the turnover, Desert Vista has put together a team with talent.

They have their sole returning starter from last year's team in 2022 Andrew King (Rice commit) who recently committed to Rice University. Andrew returned to Desert Vista after a brief stint with PHH Prep. Andrew is a player who can play either guard position, is a true knock-down shooter and excels at rebounding for his position.

The departure of other players has forced 2022 Guard Daylyn Martin (pictured) into the spotlight, and he doesn’t seem to be afraid of the limelight. He is a shifty guard who can create his own shot and frequently gets to the foul line. In the front-court, they have an intriguing prospect in 2023 Power Forward Brandon Trilli who has a great frame and good-looking jump shot and also 2022 forward Terrance Dixon Jr, who shows great athleticism and shot-block timing.

Queen Creek boasts a squad with a dynamic duo of 2022 point guard Rayden Thorson and 2021 forward Jaxton Bobik. This duo runs their team to perfection with most of their half-court sets ending in assists for Raydon and scores for Jaxton. Individually, Raydon is one of the quickest guards in the state. He can break down defenses off the dribble and create easy baskets for his teammates. Raydon is a one man press break, which helps his team’s offense tremendously. Jaxton is a very long shooter who can guard multiple positions. He can knock down jumpers off the catch or dribble, and has great range when shooting it. He is also not afraid to attack the rim, where he can score with his length.

This game was entertaining with both teams seizing momentum throughout. Early in the first half, it was all Queen Creek - led by the duo of Raydon Thorson and Jackson Bobik. Both seemed unguardable with Thorson driving for scores or kicking to Bobik for threes. They also received a scoring punch from 2022 guard Keegan Bunker.

Everything seemed to be going Queen Creek’s way, until Bunker received a technical foul. This seemed to energize Desert Vista and they were able to pull the score close going into half time trailing 28-25.

The second half was a push-and-pull effort, with Desert Vista taking the momentum. The trio of Daylyn Martin, Andrew King, and Terrance Dixon Jr. all contributed with scoring, defending and rebounding. The biggest turning point in the game was the amount of late game missed free-throws for Queen Creek.

With a chance to make it to overtime, Desert Vista relied upon Daylyn Martin, who came up with a clutch three to tie the game.

Once in overtime, the momentum switch was just too much for Queen Creek to overcome, which resulted in losing an extremely competitive game, 52-55.