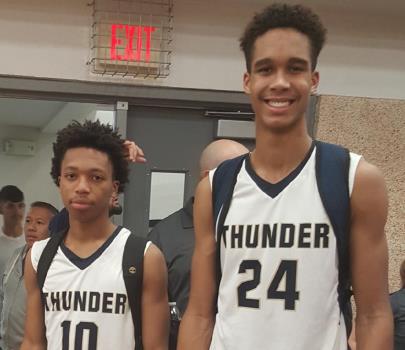 Desert Vista (26-3) had seen their Head Coach, Gino Crump, get suspended early in the high school season, only to see him return in unprecendented fashion. Amazingly enough, the team of players and coaches held together through it all, despite the administration's attempt to break them up, and are now focused on winning a 6A State Title that has eluded them over the past few years under Crump's leadership.

Cesar Chavez (22-7) had seen an early season brawl after a high school game create national attention for their program through social media, which reulted in the loss of their top performer, Ty Ty Washington, for the season. With Washington in attendance for the game on Saturday and cheering his former teammates on, Chavez came into Saturday's exciting playoff match-up as winners of 15 of their last 16 games on the season - an amazing performance on the season for the Champions.

But Chavez came to play on Saturday and were fired up to knock off the state's #1 seed in the 6A Division. They would not back down a bit in the match-up. In fact, they would bring the action to Desert Vista. After a three-pointer from 6-foot senior guard Latrell Robinson late in the quarter, Desert Vista would see their lead diminish to (3) points, 16-13, heading into the second period.

Early in the second period, Chavez would quickly tie the game at 16 all, after another three-pointer by Robinson. Then a strong 3-point play inside by 6-foot-4 senior guard Greg Evans would give Chavez a 19-16 lead. After a big blocked shot by 6-foot-5 senior post Nyjeir Andrews, and another basket in transition by Chavez, talented 6-foot-2 freshman guard Roosevelt "Tru" Washington would get another layup in transition to push the Chavez lead to (6) points, 23-17, with 3:55 left to play in the half.

With emotions and the game's level of intensity riding high, Desean Lecque from knock down a three-pointer from the corner to pull his team to within (2) points, 27-25, with 2:07 left to play in the half.

In the third period, Chavez would continue to get a strong defensive effort from Andrews against Ighodaro, so Desert Vista would have to rely on others to ignite their offense. Lecque would again connect on a three-pointer, while being contested, to narrow the Chavez lead to one, 34-33, with 3:49 left to play in the third. Osa would begin to get things going late in the quarter, and after a strong dunk attempt over a defender and getting fouled, Osa's two free-throws would give Desert Vista a narrow lead, 34-33. Another mid-range jumper by Ighodaro from the short corner would keep Desert Vista in the lead, heading into the fourth period, 40-39.

In the fourth, with both teams looking to gain a significant edge on the other, Desert Vista would find the lift they needed from 6-foot-1 junior guard Malik Mack late. After a strong driving layup from Mack, and another transition layup from Mack over defenders, Desert Vista would get some breathing room - taking a 56-50 lead with 2 minutes left to play. After being fouled and and converting 1 of 2 free-throws, Mack's tough defense and scoring outburst would give Desert Vista a 57-50 lead.

Desert Vista would go on to win the tough quarterfinal playoff match-up 67-52, outscoring Chavez 10-2 in the final 2 minutes of the contest.