Desert Vista off to an impressive start 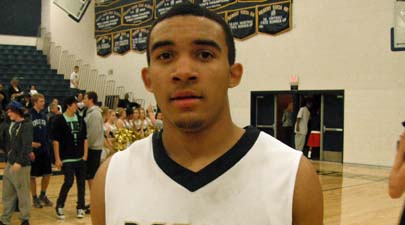 The Desert Vista Thunder is off to an excellent start this high school season, after a big road win over previous top-ranked Pinnacle HS, 70-55 in the first game of the season.

The win by the Thunder came after Pinnacle HS was regarded by many Arizona basketball enthusiasts as one of the elite teams in the state's Division-I Class. This year's match-up came as a result of the new Division-I Class - a new edition to Arizona high school basketball in 2011. With so many top teams in the state now united in this class, there will be many excellent contests this season - well, atleast on paper.

Desert Vista would make a statement to the state Tuesday evening, as they would show us just how good they can be this season.

This year's Thunder is filled with serious talent for the 2011-2012 season - loaded with division-I talent for college programs to take a strong look at this season.

Led by the play of do-it-all forward, 6-foot-6 senior forward Danny Powell (Eastern Washington signee), the Thunder will be a force all season. Powell is among the state's elite level talents and will be an absolute load for players to guard one-on-one this season. Powell's ability to rebound and score inside and out will make the Thunder exceptionally strong this year.

Also joining Powell in the limelight this season will be 6-foot-2 senior guard Jeff Lowery (Grand Canyon University signee). Lowery is among the toughest guards to defend in the state, as a result of his explosiveness off the dribble and his overall physical nature.

Lowery is coming off a very good game in the win over Pinnacle HS.

6-foot-8, 220-pound sophomore post Connor MacDougall is among the top overall post players in the state already and as a mere sophomore. This young man is a big time talent for the future and is developing a great deal and fast. MacDougall's physical nature makes Desert Vista very physical inside with the combination of MacDougall, Powell and 6-foot-8 senior forward KJ Hoffman.

Hoffman has improved nicely throughout his high school career and his combination of size and a nice skill level make him an attractive prospect, as well as a nice weapon for this year's Desert Vista team. Hoffman will provide good scoring support, while also aiding help on the glass and defensively in the interior.

The Thunder's frontcourt is absolutely loaded and is among the biggest and best frontcourt lineups in the state.

John Marshall is among the state's best on-the-ball defenders and is capable of shutting down a team's offense with his serious ball pressure. Marshall is also rated among the very best pure point guard prospects in Arizona's 2013 class - a tough, hardnosed guard with an excellent attitude. Carter is a very good utility guard prospect that will run the point position for this year's team, and will provide excellent depth in the Thunder backcourt.

Desert Vista head coach Dave Williams is a tremendous leader for the Desert Vista HS basketball program, and he will be entering his second season at the helm for the Thunder. A longtime basketball coach in the state and one of the top former players to come out of the state in his time, Williams has a lot to offer in the way of coaching and teaching. His experiences on and off the basketball court will help make this year's Desert Vista team tough to beat and prepared each night to perform.

If this week's road victory over Pinnacle HS is any indication, Desert Vista looks to be headed for another very strong season and a potential state title.