Desert Vista Looking For A Chip 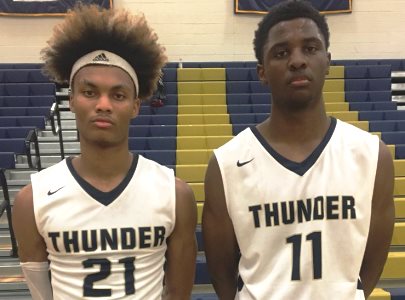 The Desert Vista Thunder and head coach Gino Crump have the tools in the shed to do something special this season.

They have the coach with a great basketball pedigree, and the elite ball-handler with true point guard vision (E.J Jackson).  They have the guard on the perimeter that can possibly drop 30 on you on any given night (Tyrek Chambers), and the guard that will lock you down on the perimeter and will do all the little things to make his team better (Alijah Gammage).  They have the 6-6 wing man with crazy athleticism (Wesley Harris) and the 6-9 center that can hold down the paint, and get buckets down low (Christian Anigwe).

Every player in their starting line-up should be balling at the next level, at some level.  So, the hopes for a state championship lies within themselves.  There may not be a more talented team not named Shadow Mountain in the state of Arizona.  However, it will be their ability to stay the course as a group and a team that will be the difference down the stretch.

Desert Vista sits at 13-3 overall, however only one of them losses has come to in-state competition, as they fell in an over-time thriller to arch-rival Mountain Pointe on the road on December 15th.  Their other two losses came at the hands of Denver East (CO) and national powerhouse Findlay Prep (NV).  However, looking beyond their record is the way they have played against some teams.  There are teams they have blown out, while it was expected to be a more competitive game, and there were games where they allowed teams to hang in against them that shouldn’t have gotten within a 20-point radius.

Sometimes in basketball, what comes with talent is a mixture of characters.  That sentiment sits true with this group of players.  While my interactions with them have all been positive, they are a great group of kids, they have a mixture of strong personalities on the team that sometimes will make it hard to blend when the games get close and competition ramps up.  Nevertheless, they have what it takes to make a deep run into the playoffs, and have very realistic State Championship aspirations.

Tyrek Chambers has the ability to play at a high major program at the next level.  As of late, he has struggled a bit to find his early season footing and find his shot from the outside.  His last outing against Higley looked to be a good one, as he looked as if he was ready to get back on track.  He is the guy on this team that can create his own shot, but he is a competitor and will need to keep his emotions in check, while still keeping his competitive edge if his team will be able to take their game to the highest level.

Wesley Harris makes as big of impact as anybody on this team.  He is their best athlete and might even be the best player on a roster filled with guys who can play Division-I basketball.  He is a dunk machine, and the guy that takes them from a notch.  Harris was nursing a groin injury over the holiday break, and you could see the difference he makes when he is on the court.  He is expected to be back on the floor when they take on Highland tomorrow evening.

Christian Anigwe’s play down low is absolutely huge for DV.  When he plays big, this team looks like it can compete with just about anybody.  At times, he disappears on the floor which is baffling to see after you have seen what he is capable of when he is engaged.  Anigwe has a real scoring ability in the paint and is a factor down there.  He will need to find consistency in the 2nd half of the season in the state’s toughest conference.

E.J Jackson, their 5-foot-7 point guard, is who makes the engine run.  His ability to be a single-man press break and find open teammates for easy buckets sets the tone when the Thunder are at their best.  When he is the leader on the floor and orchestrating their offense, they are as hard as it comes to stop on that end.  He also brings an intensity on defense that helps them use their athleticism and speed in the open court.   The floor general knows all this.

“Our team is at our best when I am being aggressive, and setting the tone for my teammates, and keeping the foot on the pedal for all four quarters," said Jackson.  "Our goal as a team is to become stronger as a group, and do what we have to do to get us a state championship.”

He went on to talk about Harris’ absence in their line-up, “Wes is our team captain and we need him on the floor every game," said Jackson.

When asked about his backcourt mate and New York City transfer, Chambers, he raves - "Tyrek has brought a lot to our team," said Jackson.  "His skill level and ability to shoot the ball is tough and we need that from him."

It’s not hard to see that Jackson gets it as a point guard.  He understands what each player brings to the table.  He is also a player and kid that wears his emotions on his sleeve.  When he is able to channel that, him and his team go to new heights.