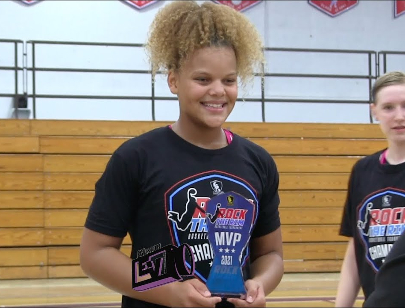 With the 2022-2023 Arizona high school basketball season upon us, it is time to start looking at the high school programs to take a hard look at this season. One girl's program that will be on completely another level this high school season, regardless of class or division, will be Desert Vista High School. Led by longtime successful and dedicated Head Coach Dave Williams, this year's version of Desert Vista will be one to watch all season long, as The Thunder will be absolutely loaded this season, after a 6A State Championship runner-up finish last high school season.

Dave Williams and his staff were excellent last season in leading their program to the top of the state's 6A standings, as the team finished with an impressive 25-5 overall record on the season and went undefeated (10-0) in their Central Region. The team would come up just short of winning a state title - falling to 6A State Champion Valley Vista in the championship game (59-34).

Impressively, Desert Vista returns this season with the strongest lineup in the state, as the team will return just about every player this season from last year's team - only losing one senior to graduation. Desert Vista will return this season with a well-balanced line-up from top to bottom, that includes sophomore rising star Dylan Swindle, who led the team in scoring and rebounding last season (16.3 ppg) and also sophomore Michaela Fairwell who also averaged double-figures last season as well. Junior stud point guard Eanae Dagons also returns this season as well, and is a handful for opposing guards.

Desert Vista also got a super shot in the arm as well, as this year's team will now also feature two of the elite overall prospects in the state. Desert Vista received a high-major transfer to their program, and also received the services of a superstar freshman prospect, as 5-foot-6 junior superstar guard Shay Ijiwoye and freshman Jerzy Robinson (pictured) both enter the program for this season.

Shay already has a college-ready body, In fact, she may already have a pro body, as she is physically gifted with superior size and strength. She has a skill-set and feel for the game that are glaring. She is also a true-point guard that facilitates for her team and teammates, and creates off the dribble at a high level. She is a strong finisher in the lane and in the open floor. She also has a nice shooting stroke with range, and is simply very difficult for opposing guards to defend. Shay has always played up with older competition, so now as an upperclassman, we will now see her absolutely dominate her competition.

Shay will have a tremendous junior season for DV, as she will team up with Jerzy Robinson on this year's roster. Robinson is as good a prospect as the state has ever seen entering the high school ranks, as she is a bigger guard prospect that has amazing versatility, able to play numerous positions, and has a very advanced offensive skillset. She is able to play inside and out, and is also able to play the point position, as needed, since she is almost unstoppable with the basketball in her hands. She can create off the dribble at will, and has the physicality to overpower her defenders and finish strong at the basket. She is a sure-fire superstar for the future, and will make her high school debut this season, after already becoming a social media sensation.

Robinson will become an absolute national star in the sport over time, and while national rankings have not been done yet for her class by ESPN, she is projected to be the top or one of the very best ranked prospects in America very soon, once the new rankings are released. She already holds that distinction by many other national scouting services currently.

Together, Shay Ijiwoye and Jerzy Roinson will be a handful this high school season for opposing teams, and that doesn't include the very gifted roster of girls that will also return to help make Desert Vista the absolute favorite to win this year's 6A State Championship. In fact, I believe this year's Desert Vista team will rank among the elite (Top 20) programs in America this high school season, and, by next season, could compete for a national championship. They will be that good over time.

Head Coach Dave Williams and his long-time assistant coach Duane Casey have been together for a long time, too many years to count, and they have coached some of the top boys and girls prospects in this state over the past (30+) years. This could be their best team - boys or girls.

Our staff is very excited to watch this Desert Vista girl's team in this weekend's Arizona Preps Girls Fall Showcase, which will be held @ Sandra Day O'Connor High School on Saturday, October 1st.