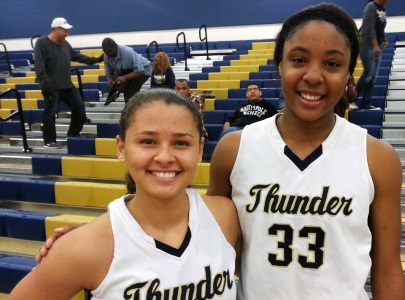 Desert Vista girls have done it.  After an amazing season where they finished with an impressive 30-2 overall record on the season, which included only two losses on the season, both at the hands of Mesquite High School, the Thunder would put it all together against the state's best teams to win this year's Division-I state championship on Saturday afternoon.  After breezing past Mountain Pointe in the state playoffs, Desert Vista would defeat top-seed Dobson HS in the semi-finals and then blow past a quick Westview team in the state final on Saturday, 53-37.

Anigwe was just too much inside for Westview, as Desert Vista got the ball inside to her for an early first half lead.  Anigwe would score 9 points in the second half, as DV outscored Westview 20 to 3 in the third period and went up by as much as 21 pints, 43-22, in the third period.

Haines and Anigwe, two of the state's and nation's elite girls 2015 prospects, will be back next season to lead Desert Vista to back-to-back state titles.