Desert Vista Focused On 6A Title 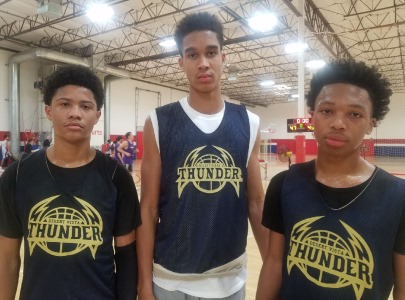 Desert Vista Head Coach Gino Crump and his hard-working basketball staff have had their sights set on winning the 6A State Championship since Crump took over the program in 2016. This season will be the Thunder's best chance to win it all, as the program will feature one of the most talented lineups in the state, led by the superb overall play of gifted 6-foot-9 do-it-all senior post Osasare Ighodaro (Marquette University signee).

Crump and the Desert Vista program have ranked among the elite programs in the state since Crump took over the program. Crump and his experienced staff have been extremely successful at the helm, compiling a nice 61-21 overall record in Crump's tenure, while he has rebuilt the Thunder program. This season though will be Crump's best chance to win it all, as the Thunder are our pre-season favorite to win this year's 6A State Championship.

While Desert Vista is absolutely loaded with talent this season, the dominant overall play of Osa Ighodaro is the key, and will be impossible for opposing teams to match up with one-on-one. Osa is simply different, as he is a very tall and lengthy performer that can score inside and out. He was very difficult for opposition to defend all spring and summer on the club circuit, and so he will be an absolute load this season for opposing teams, cauging teams to key on him all season and alter their team defenses to match-up with him.

Osa developed more than any player in the state this off-season, and he looks to be a future pro prospect. Before this young man moves on to have a strong career for Marquette University in the historic Big East Conference, look for Osa to compete hard for Player of the Year honors all season. He should have a season that will mirror that of former Moon Valley HS superstar and NBA veteran Richard Jefferson. Jefferson led his Moon Valley team to an elusive state title in his senior season, and Osa's senior season should look very similar, as he is just as talented.

The Thunder will also provide excellent guard play this season, which will be very necessary for this team that has such a dominant post player. The point guard play for the Thunder will be tremendous this season, as the program has two terrific point guard talents in 6-foot junior guard Marcus Wady and 6-foot sophomore guard Dasean Lecque. Wady is a sure-fire talent that plays the game with an extreme level of self-confidence and has a a nice overall skillset that makes him difficult to defend, especially when he gets going.

Lecque recently moved to the state of Arizona from New Jersey and is the younger brother of Phoenix Suns (NBA) rookie guard Jalen Lecque. This young man was just what the doctor ordered for the Thunder coaching staff, as he will provide excellent depth at the point guard position, as he is a pure point guard prospect that has a very developed understanding of how to run a team. Lecque is also an excellent scorer of the basketball, but he has a very good feel for the game and understands when to get his and when to create for his teammates - a nice attribute that will allow Crump to play him on the floor at either guard spot.

Osa will not be alone in the post either, as the strong inside play of another transfer, 6-foot-8 junior forward John Solomon, will be a major force for the Thunder this season. The son of former MLB superstar Bobby Bonilla, Solomon will be a force this high school season for Desert Vista, as he possesses excellent size and athleticism for a player his size. He is a very active rebounder and finisher around the paint, and will be an absolute load for opposing teams to keep off the glass - especially when you consider that another 6-9 beast will be helping weakside, in Osa. The addition of Solomon to this year's Desert Vista group be prove to be immense in their title run this season.

Another major key for this year's team will be the strong overall play of 6-foot-2 sophomore guard Andrew King. King is a versatile and very tough performer that plays to win and competes hard on both ends of the floor. King is a skilled offensive weapon that can score in bunches, but his best asset is his ability to defend several positions on the floor and actively rebound the basketball. King started almost every game as a freshman a year ago, and he should have a nice breakout season this year in his sophomore campaign.

The Thunder will be very young though this season, as Osa Ighodaro will be the lone senior on this year's ballclub, a very interesting fact. The Thunder program is absoilutely loaded with top-rated young talent for the future, but this season will be a big one for Desert Vista, as a player like Osa does not come around often. Crump has worked hard to develop Osa as a player, on and off the court, for several years now, as well as many other players in the program, and this year it should all pay off for him and his staff.