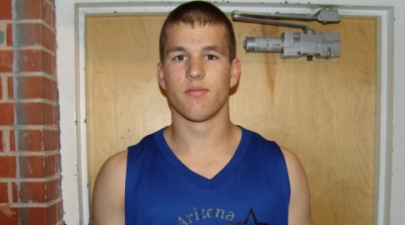 Chaparral, led by new head coach and former Pepperdine University assistant coach Damin Lopez, would not have been in this position had they had the services of star 6-foot-8 junior forward/center Joe Boyd all season. Boyd returned to action just recently after suffering a severe ankle injury early in the season.

Boyd would be fired up early in the match-up as he would attempt to lead a game group of players against the state's top-ranked team in Division-I's Section III. Boyd would score 5 quick points in the game to give his team a fast 8-0 advantage in the first perod.

A steal and a dunk by Desert Vista's 6-foot-1 junior guard Kyle Pitman would give the Thunder momentum, as they would end the first period down by two points, 14-12.

In the second period, an offensive rebound and put-back by 6-foot-5 senior forward Danny Powell (Eastern Washington signee) would tie the game at 14 all.

Desert Vista would walk away with a 26-23 halftime advantage.

Desert Vista would hold on to a 7-point advantage in the game's third period, as both teams would fight to gain momentum.

After taking a 43-34 lead at the end of three quarters, 6-foot-1 junior point guard John Marshall, who played strong all game on both ends of the floor, would covert consecutive driving layups to lead his team to a 66-54 win.

Desert Vista will now face #4 seed Pinnacle HS on Friday at Chaparral HS in an exciting rematch from an earlier game in the season - a game that Desert Vista won on the road at Pinnacle (70-55).