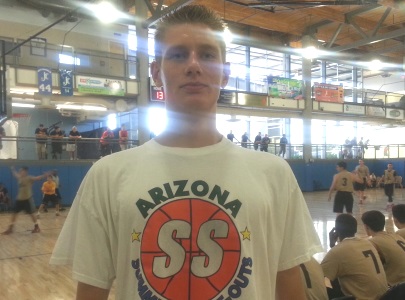 With many of Arizona's top-rated senior prospects from the 2014 class signing this week, there are still loads of prospects in the state that will be available for college programs during the late signing period.  One of these prospects still available is developing quickly, and will become one of the better prospects this high school season for division-I college coaches to take a hard look in the spring.

Desert Ridge High School's 6-foot-8 senior forward Cameron Chatwin is that guy.  A rapidly-developing wing prospect that emerged on the recruiting scene last high school season, Chatwin has blossomed into a serious division-I prospect as of late - growing physically and possessing a wide variety of skills.

Interestingly enough, the Desert Ridge basketball program struggled last season in the state's top Division-I Class - finishing with a dismal 9-16 overall record on the season for head coach Greg Ream.  While the varsity program would not compete for a spot in the state playoffs last season, the team was loaded with young talent for the future, and will return one of the most talented line-ups in the state this high school season.  In fact, look for the Jaguars to be among the most improved teams in the state this high school season - regardless of class.

Desert Ridge will have three of the state's top overall performers this season in 6-foot-3 ultra-athletic senior guard Hunter Thomas (18.7 ppg), gifted 6-foot-6 sophomore forward Teddy Allen (14.6 ppg) and Cameron Chatwin whom averaged 7.6 points, 4.4 rebounds and 1.8 assists last season. These three prospects will each return this season to give head coach Greg Ream one of the most talented line-ups in the state.

Chatwin is a talent and caught my attention last season while his team participated in the McClintock Holiday Shootout.  While Hunter Thomas emerged in the event with several big scoring outbursts, Chatwin caught my attention with his unique ability to step outside and shoot the basketball with nice range.  His fluidity as a prospect, combined with true size and length make him a very attractive prospect with nice upside.  Chatwin has grown physically a lot since last season as well - growing in size and stature.  This suggests that he still may not be done growing, and could squeak in another inch or so.  Especially when you consider his length of body and broad shoulders.

Chatwin has excellent versatility as a player, able to step outside or score from around the painted area.  While he will look to project as a small forward in the future for college, he will see his time this high school season as a post - a position he will need to embrace to help Desert Ridge progress this season.

Chatwin will take an official recruiting visit to Saint Martins University (WA) next week, a division-II basketball program.  If Chatwin will wait until the spring signing period to make a move for himself, I look for him to emerge as a division-I prospect, as he has flown well below the recruiting radar.

Very few prospects possess Chatwin's combination of size, length and ability to shoot the basketball, so this young man will be one to watch this high school season and definitely one prospect to keep an eye on during the spring evaluation period.

Chatwin is also a member of the Morman religious faith, so he plans to take his two-year Mormon mission in the future - after high school.