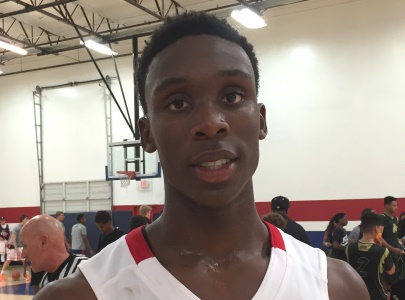 While our Arizona Preps' staff was unable to catch Friday's action at this year's Desert Challenge, held on the beautiful campus of Rancho Solano Prep, we were able to catch much of the exciting action on Saturday, as each of the teams were in competition.  With so much going on in the state of Arizona as of late, this event is another exciting addition to the state, that has brought some very quality, and even superior competition to the state for Arizona basketball enthusiasts to witness.

These days, and over the past several years, whenever tournament organizers match-up an Arizona high school team with the nation's premier high school program, Findlay Prep (NV), it is a match-up that has to be carefully thought out, since Findlay Prep is so dominant and always loaded from top to bottom.  Each year, our state traditionally has one team that can give this division-I laden group a contest.  This season, we have two teams.  Findlay had a good contest with Desert Vista HS last weekend in the Hoop Hall West.  While they would win the game by double-digits, Findlay would use all of their players in the victory, which included 7-foot-3 senior star post Bol Bol.  Shadow Mountain would be an awesome match-up with this team, as a result of their tremendous toughness, guard play and execution on the floor.  The two teams will not face each other this season, unless it is in the Dick's Sporting Goods national tournament at the end of the season.

This weekend, Findlay Prep would again blow out lesser competition, and without the services of Bol Bol.  On Saturday evening, it made for an exciting match-up, as this very loaded team faced a very young Higley HS team that features two of the nation's elite 2020 prospects - 6-foot-8 sophomore post Jason Harris and 6-foot-10 sophomore forward Shon Robinson.  Higley (5-5) has struggled this season to get into a groove since the team is very young, but they are led by a high quality coaching staff, which is led by Jerome Joseph, one of the best young coaches in the business.

The game would get out of reach for Higley almost immediately, as Findlay would jump out to a fast 14-3 lead.  Higley's Jason Harris would go to the bench early in the quarter, but he would quickly get inserted back in to the lineup and would give his team some life with several strong drives to the basket.  Harris would face his biggest test of high school career, as he would be matched up with Findlay's long, lengthy and talented 7-foot-3 senior post Connor Vanover (Memphis signee).   Vanover would defend Harris on the perimeter, showing excellent versatility in his ability to stay with the talented young prospect.  He would make it very difficult for Harris to get his shot off, as it would be for any player being defended by Vanover.  Harris though showed an advanced offensive skillset off the dribble, and was able to create space from Vanover, while also being able to use good footwork in the post to make moves towards the basket, but Vanover is able to recover quite nicely as a result of his superior height and length.  Findlay would take a 19-9 lead into the second period.

Higley would never get any closer in the contest, but would scrap hard for the entire game.  This young group was just overly matched and could not compete with Findlay's strong low post players and superior guard play.  Findlay would cruise to a 91-57 victory.

The game would look to be headed in Rancho Solano's favor in overtime, after 6-foot senior guard Caden Hoffman would make a nice assist to his teammate, 6-foot-3 sophomore guard Kiimani Holt, under the basket for a layup - giving Rancho a 63-61 lead with a minute to play.  But after several free-throw attempts by both teams, Oak Park would travel the length of the floor and convert a strong drive to the basket at the buzzer to win the contest.

Kiimani Holt would finish the game with a team-high 21 points in the loss, while Oak Park's skilled 6-foot-9 senior post Riley Battin (University of Utah signee) would finish with a game-high 26 points in his team's win.

Scouting Notes:  Rancho Solano Prep 6-foot senior point guard Caden Hoffman has really improved as a player and a college prospect over the past several years.  He has been consistent with his play every time I have seen him perform, which is rare.  This yougn man has worked hard on and off the court to develop as a player and prospect, and it shows, as he is a very good shooter of the basketball with range and makes quality decisions on the basketball court.  Hoffman is a floor general for his young team, and has provided excellent leadership from the point guard position.  A nice prospect for a smaller college program . . .

Rancho's Kiimani Holt is a nice rising prospect that we have written a lot about over the last year, and I am always impressed with this young man's superior athleticism, and ability to make plays for his team.  He is a shooting guard prospect, but has very good overall versatility as a player, as a result of his strength and ability to get off the floor quickly.  Holt continues to impress and will see serious college recruitment over time.  While he is not big in stature, his ability to play above the rim and upside are glaring.  He has a very bright future ahead of him . . .

Higley's Jason Harris is an elite national prospect, but Saturday night was the first time I have seen him go against some much taller and longer than him, in Findlay's Connor Vanover.  Harris showed a nice handle of the basketball o nthe perimeter and very good footwork in the low post.  He did not force shots, even though his shot was blocked or changed quite often by the lengthy Vanover.  I was impressed by Harris' intensity level on the floor, willingness to compete and aggressiveness against quality competition.  Harris is an elite level prospect for the future in either basketball or football, and when you consider that he will have two more years of high school basketball remainning, it is almost scary to think of how good he can become . . .

Higley's 6-foot-9 sophomore forward Shon Robinson showed a nice ability to play on the perimeter, and shoot the basketball with range on his shot in his team's loss to Findlay Prep.  Robinson has excellent versatility as a player, and as he adds some physical girth to his long, thin frame, he will maximize his potential over time.  He is not able to mix it up inside quite yet with older, stronger competition, but, over time, that should change a great deal.  This young man has the potential to become similar to a Channing Frye (Cleveland Cavaliers) over time - a a long, lengthy and bigger wing that can shoot the basketball with range.