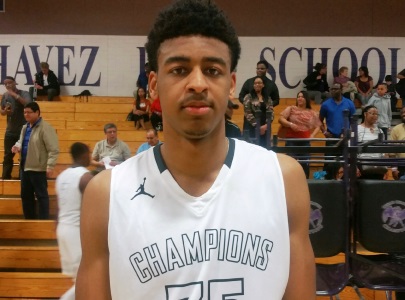 One of the top available prospects in Arizona's 2017 class is now officially off the recruiting board, for at least two years, after Cesar Chavez High School's 6-foot-9, 225-pound unsigned senior post Demond Hart decided to elect to go to Lee College (TX) - one of the most loaded junior colleges in the country.

Lee College (TX) is widely known in the junior college ranks as one of the top-rated junior college programs in America currently, consistently known for producing high-major division-I talent.  While the program is also known for underachieving with such top-rated talent, there is no mistaking the program's level of players and achieved college recruitment for the members of their program.

While he still lacks any true low post moves for himself, he may never become an offensive weapon, but instead he should develop into a serious rebounder and finisher inside the paint.  While playing against strong competition daily at Lee College, look for hart to improve immensely.

Lee has played through the summer though, while committed, with a Team Harden team that struggled to win games on the AAU/club circuit.  Hart found himself in foul trouble often throughout competition, but the experience created by the Team Harden organization of traveling around the country gave new experiences and a higher level of confidence for Hart as he prepares to play at a much higher level in junior college.

This past high school season, Hart averaged 5.5 points, 7.6 rebounds and 2.1 blocks per/game, for a team that finished with a terrific 24-5 overall record on the season, and a strong finish in the state playoffs.

Congratulations to Hart on this amazing accomplishment for himself.  If he can continue to work hard, and even much harder, on and off the court, the sky is the limit for him.

Arizona Hoop Review Scouting Report:  Hart is a large and athletic  post prospect that is still very raw offensively.  He still needs much development as a post player, so he still needs a lot of work overall on his approach to the game. His size though is very attractive, and he possesses very good athleticism for his size – able to finish plays strong at the rim and also keep plays alive with his quick jump off the floor.  A very good rebounder and finisher that will only develop over time.  An excellent shotblocker with excellent timing.  Doesn’t score often unless off a finish from an assist.  Needs to develop his post skills, but can be a force defensively.  Runs the floor very well.  A project that will blossom over time with serious skill work and focus.