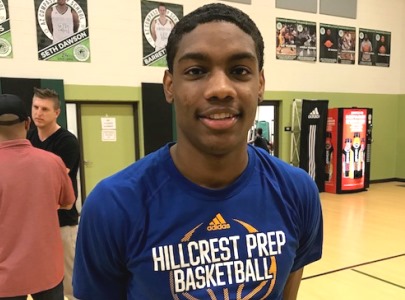 There are still numerous Arizona prospects in the 2018 class that remain unsigned, and I look for many of these prospects to begin to garner serious recruiting attention this spring, during the late signing period.  One of the top available prospects in the class is Hillcrest Prep's 6-foot-3 unsigned prep guard Demarius Jacobs.  Jacobs one of the top unsigned guard prospects in the West, and this week he received a big scholarship offer from a Big-10 program from his hometown.

A native of Chicago, Jacobs came to Hillcrest Prep as a post-graduate prospect last spring with his younger brother Markese Jacobs (Kansas commit).  Markese left the program this fall, and Demarius decided to stay put - flourishing in the process.

Demarius has been one of the hottest prospects in the state all season, after receiving an offer from Arizona State University early, after just moving to the state.  Since, Demarius has received offers from Western Kentucky and Saint Louis.

This week, Jacobs received another big offer when the University of Illinois made an official scholarship offer to him.  Jacobs recently advised me that Illinois had been recruiting him the hardest, so the offer simply capped it off.  Illinois assistant coach Ron Coleman made the trip to Arizona for a recent game, and came away very impressed with Jacobs and his performance in a recent game with AZ Compass Prep.

Jacobs also recently advised me that he is nearing a college decision, although he didn't have a leader at this point in time.  Since Illinois is currently recruiting him the hardest, and also the lure to go back home and play for the in-state powerhouse program, will be qualities that will be tough to beat for other college programs on his list.

Jacobs is a rare find among guard prospects, as he is very talented, ultra-athletic and plays much bigger than his size suggests, as a result of his lengthy body.  He is a solid addition for any college program that lands him as a result of the level of confidence that he plays with, and the ability he has to play the game at a high level.  A big-time sleeper prospect still, the offer from Illinois proves this young man's potential to play at the highest level, and raises his recruiting stock among other high-major programs.

Look for a commitment from Jacobs soon, as he continues to also help lead a loaded group of prospects from Hillcrest Prep.