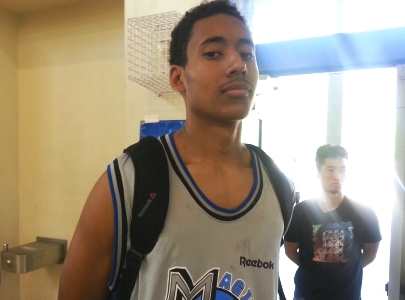 After taking an official recruiting visit to North Carolina A&T this weekend, and with several division-I programs looking to get involved, James decided to give a verbal commitment to the MEAC program and head coach Cy Alexander.

In the final season of his high school career, James produced a great deal - averaging 21.2 points and 12.2 rebounds per/contest.  In his junior season, James poured in very strong numbers as well - averaging 21.1 points and 12.6 rebounds per/game.  James also came off a solid spring and summer, where he gained valuable experience against stiff competition on the club circuit.

James is a full academic qualifier and will sign a national letter of intent in April.

Congratulations to Deion and his father Rodney on this amazing accomplishment from our Arizona Preps staff.

Arizona Hoop Review Scouting Report:  James is an attractive looking prospect, as a result of his nice size and skill level.  While still developing a great deal, James emerged early in the state as a freshman, and then has continued his progress as a player throughout his high school career.  This young man has excellent potential for the future, as he continues to mature physically and mentally.  He is just beginning to realize how good he can become.  Still very young, James is a talented and skilled 3/4 prospect that has very good size and a nice overall skill level.  He needs to embrace the four position much more in his play rather than fade to the wing.  As he continues to play stronger in the low post, he will open up his overall game as a player.  There aren’t many in the class that possess his combination of size and skill level.  A very nice looking prospect in a 2015 class, which lacks a lot of players like him.