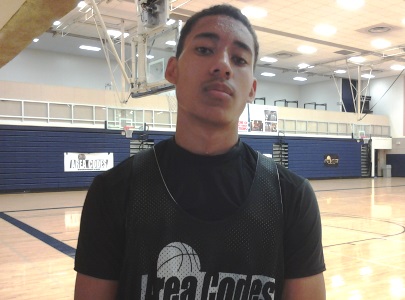 One of the elite prospects in Arizona's 2015 class is Tucson's top-rated rising senior prospect, Empire High School's Deion James.  The 6-foot-7, 210-pound rising senior forward is a talented prospect with loads of potential for the future.  As a result, James is receiving loads of division-I interest for himself heading into the summer evaluation period - the most important summer of his high school career.

James is an attractive looking prospect to many college programs as a result of his nice size and skill level.  While still developing a great deal, James emerged early in the state as a freshman, and then has continued his progress as a player throughout his high school career.  This young man has excellent potential for the future, as he continues to mature physically and mentally.

While living in Tucson, Arizona and competing in the state’s smaller Division-III Class, James has flourished.  James poured in very strong numbers in his junior season - averaging 21.1 points and 12.6 rebounds per/game.  In his sophomore season, he poured in 15.5 points, 8.7 rebounds and 3 assists per/game.

James is a talented and skilled wing prospect that has very good size and a nice overall skill level.  He needs to embrace the four position much more in his play rather than fade to the wing.  As he continues to play stronger in the low post, he will open up his overall game as a player.  There aren’t many in the class that possess his combination of size and skill level.  A very nice looking prospect in a 2015 class which lacks a lot of players like him.

I will keep a close eye on James this summer and bring you any recruiting updates as they continue to develop.