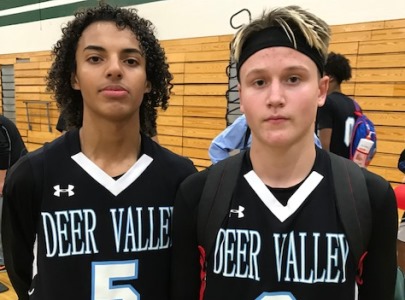 It just might have been a preview to this year's 5A State Championship game, as the state's top team teams in the division faced off in exciting fashion in the finals of this year's Hoopsgiving pre-season tournament at Sunnyslope High School on Friday evening.  Sunnyslope (3-1) would host in the event, and look to win the tournament championship again, after appearing in the 5A state finals the last two seasons, and winning the 2017 State Championship.

Deer Valley High School (4-0) is our favorite this high school season to get there as well, as the team is absolutely loaded with talent and will have the school's best chance to win it all this season.  The two teams would match-up in a very exciting affair Friday evening in front of a large crowd, in what would be a competition between two of the state's top teams, some of the state's top players and two of the state's elite coaches.

Sunnyslope HS head coach Ray Portela is one of the best pure coaches in the state, and has built and developed the Vikings program into a consistent top performing program in the state, while Deer Valley's Jed Dunn is an elite coach that has done the same for the Deer Valley program.  Coming to the state from Ohio where he helped develop such talents as NBA superstar Lebron James, Dunn is a veteran coach with a relentless pursuit to develop players and build a program at Deer Valley that basketball enthusiasts in the West can be proud of.

The two teams would make for an exciting game, as Sunnyslope would take a 27-20 lead after one quarter.  In the second period, the two teams would fight hard to compete.  With 2:31 left to play in the first half, freshman guard Jackson Leyba would steal the basketball and convert a strong layup on the other end to pull Deer Valley to within 4 points, 27-23.  Then with 2 minutes left to play, senior guard K. Williams (pictured left) would convert a three-pointer from the wing, as Sunnyslope would finish the first half with a narrow, 28-26 lead.

The third period would also remain close, as both teams would fight hard to gain any momentum that was possible.  Sunnyslope would hold on to a 41-39 lead after the third period.

In the fourth period, senior guard Dylan Breckner (pictured right) would get it going.  The skilled and crafty guard would give the tough Sunnyslope guards fits all night, but he would save his best for the final quarter, as he would score on a left-handed drive to the basket - tieing the game at 41 all.  He would then convert a floater in the lane to give Deer Valley a 43-41 lead.  Deer Valley would look to keep the ball in Breckner's hands down the stretch, but Sunnyslope would look to keep him out of the play as well.

Late in the fourth period, the Deer Valley team would gain confidence, as they felt the tournament title in their grasp.  The team's defense would improve late as Sunnyslope would look to get good shots, but would struggle finding good opportunities in their offense.

After two free-throws from Breckner late, Deer Valley would take a 51-46 lead, before a breakaway layup from junior wing Jaret Allen would allow Deer Valley to stay in front, 53-48 with less than a minute to play.

Sunnyslope would fight hard late to make up the deficit, but after two free throws late from senior guard Noah Medrano, Deer Valley would win the game and the tournament title, 55-52, over host and defending 5A state champs, Sunnyslope.

It was an exciting contest, and we will get to see it again on December 18th, when Sunnyslope travels to Deer Valley High School for the exciting rematch.