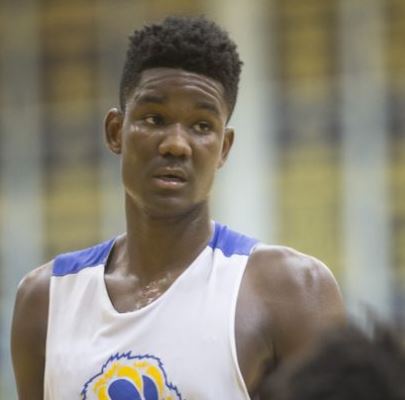 The No. 1 player in America's 2017 Class resides right here in the state of Arizona, and has for 3 years.  At Hillcrest Prep Academy, directed by Matt Allen and Nick Weaver, located on 34th street & McDowell, this program is having a big year.  Recently when that #1 player, 7-foot-1 senior post DeAndre Ayton was selected to anchor the 2017 McDonalds All-American team, the program received an honor that most prep schools around the country do not possess.

Now with a McDonald's All-American under their belt, the Hillcrest program has gone to another level.  Hillcrest also recently played on ESPN in a nationally televised game.  As a result, every top shoe company, including Adidas and Under Armour, are now looking to land the program for a long-term contract.

When Ayton gave an early verbal commitment to the University of Arizona Wildcats, it gave head coach Sean Miller his first #1 nationally rated player commitment ever, and also his biggest commitment ever.

Ayton chose Arizona over Kentucky and Kansas (in no particular order).  As a result, Ayton gave the Arizona Wildcats hope for a future final four appearance.  This young man has proved that he is a rare find in the high school ranks - anywhere on earth.  Honestly, we have never seen a player of his size and skill level, and with his ability to run the floor and make plays in the post or from the perimeter.

University of Arizona head coach Sean Miller had this to say about Ayton, "I’m not gonna sugarcoat it, he’s one of these once in a generation types of players,” said Miller.  “He is big, 7-foot, and the fact that he hasn’t lifted weights is astonishing to me. When you look at him and shake his hand he has a physical presence as a young person that you don’t often times see.

“The thing that is striking about DeAndre as a player is he is really smart. He has the know-how of how to play with four other players that not a lot of big guys don’t have. He can pass, he can step away from the basket, he can dribble the ball, he’s a skilled player. With 7-footers, with sometimes they play the game because they’re tall, but he loves the game. He’s obsessed with being a great player. Because of that, his future is obviously incredibly bright. We’re all looking forward to providing him an environment where he can grow, but also where he can give us and our team and the recruiting class that special player that can go inside and out.”

This year’s McDonald’s All American game is scheduled for March 29th at the United Center in Chicago.  It will be televised on ESPN.

Here is the full roster both teams - East and West.